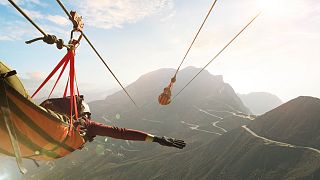 On the northern coast of the United Arab Emirates, about an hour's drive from Dubai, sits the beautiful city of Ras Al-Khaimah, or RAK, as the locals call it.

Surrounded by fierce mountains and spectacular gold and white dunes, the city is the sixth largest in the Emirates, and in recent years has become a well-known destination for thrill-seekers, looking to avoid the crowds of Dubai and Abu Dhabi.

After two years of pandemic restrictions, RAK is the ideal destination for travellers looking for a taste of adventure.

"It's a place where nature is at the forefront of everything that we do, and you get to have something that isn't available anywhere else," Raki Phillips, CEO of Ras Al Khaimah Tourism Development Authority, told Euronews Travel.

The city is home to the UAE's highest peak, Jebel Jais, which crowns the rugged Hajar Mountains with its 1,934-high summit and offers spectacular panoramas of the city below.

Where is the world's longest zipline?

Prepare to be a little colder on top of the mountain than you'd be down at sea level, as temperatures are usually 10 degrees Celsius cooler than on the ground.

Once there, you can strap on for a knee-trembling three-minute flight above mountain peaks, deep ravines, date palm farms, and the Arabian gulf at speeds of between 120 and 150 kmph.

If this sounds absolutely terrifying, you'd be correct. But more people are eager to try this hair-raising experience than you'd think: since its opening in 2018, over 70,000 people have taken a ride.

Can I go ziplining in the Hajar Mountains?

If a three-minute flight sounds too quick, the Sky Tour offers you a chance to fly over RAK for up to two hours.

Thanks to a combination of six ziplines, you'll be able to fly above the craggy Hajar Mountains for 5 kilometres at an average speed of 60 kmph.

Where can I ride the Jais Sledder?

If flying isn't for you, you can still explore RAK's spectacular mountains while sitting comfortably in the most insane-looking rollercoaster you can imagine: the Jais Sledder.

The Jais Sledder is a 1,885-metre-long toboggan track that brings visitors through the mountains with hairpin bends and cutthroat curves at an average speed of 40mph. In eight minutes, the ride takes you through spectacular landscapes, which you can enjoy with a partner, family member, or friend.

Can I go horse riding in RAK?

There's no shame in wanting to remain at ground level though, and if that's the case, you might prefer to explore RAK's red dunes on top of a majestic Arabian horse, like the ones of Al Wadi Equestrian Adventure Centre.

The ride takes you through the unspoilt landscape surrounding the centre, populated by oryx, camels, desert foxes and, occasionally, desert cats.

Even if you don't know how to ride a horse, it's worth visiting the centre just to admire them. Arabian horses have been celebrated in poetry and myth and play a key role in Arabian tradition and identity.

The Arabian oryx, on the other hand, is the national animal of the UAE and the largest mammal living in the red desert of RAK.

The Bear Grylls Camp in RAK

If you're an aspiring explorer, the Bear Grylls Camp in RAK will teach you how to survive in the wilderness, whether you find yourself stranded in the desert or lost in the mountains.

Would-be explorers can bond over their tasks, spend the night in cabins under the starry sky and share an overnight BBQ in the mountain terrain.

The survival skills taught at the camp (which looks like something out of a videogame) are based on the ones taught to the British Armed Forces and promise to push your boundaries.

If that sounds like a threat, don't worry: the adventures at the camp are family-friendly.

Can I parasail in RAK?

If mountains don't make your heart flutter as much as the deep blue sea, you should try parasailing.

Strapped onto a parachute, alone or with a second person, let yourself be gently guided by a boat through the crystal clear waters of the Arabian gulf while enjoying a unique view of the city.

Wrap it up with a picnic in the Hajar Mountains

It's still quite a challenge (and an adventure) to get there, but once you arrive at Camp 1770 on top of the Jebel Jais you will be able to sit back, relax, and enjoy a picnic in the highest camp in the UAE.

Around the campfire, visitors can practice yoga, drink hot chocolate, share stories and enjoy traditional Arabian food, all while admiring the Hajar Mountains lit by the silvery light of the moon.

If you're a beginner, it's recommended that you hike to the camp in the early hours, rather than at night, but the views are just as magical in the morning and the Emirati breakfast just as tasty.

"The food in the Emirates is fantastic," Phillips says. "But don't forget, the UAE is very multicultural: it's a nation that hosts 200 different nationalities serenely. You can eat food from all over the world and be able to enjoy it. I think after so much adrenaline, you need some relaxation on the beach."

RAK's options for accommodation range from the luxurious (with the Ritz-Carlton hotel or the Waldorf) to affordable hotels and even glamping.

The sun shines all year round here, with much more than adventure on offer: "There's cultural heritage, from all the different tribes here - you have the mountain tribe, the ocean tribe, the desert tribe, and they’re all intertwined together," said Phillips.

The city also has four tentative UNESCO World Heritage Sites, Julfar City (an important pearl trading town during the Islamic Period between the 5th and 16th century), the Pearl Trade City on the Red Island, and Al Shamal and Al Dhayah, two cultural sites that testify to the history of RAK.