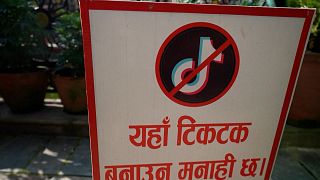 Many popular tourist sites in Nepal are banning visitors from making TikToks   -  Copyright  FRFT via EBU
By Lottie Limb  with EBU  •  Updated: 02/11/2022

Nepalese tourist hotspots have banned TikTok in a bid to disperse disruptive ‘selfie crowds’ and restore some peace at sacred sites.

Though videos on the popular app can be as short as 15 seconds, too many visitors have taken to posing and dancing in front of religious attractions like Kathmandu’s magnificent Boudhanath Stupa.

‘No TikTok’ signs have also gone up at the Buddhist pilgrimage site Lumbini, Ram Janaki Temple in Janakpur and Gadhimai temple in Bara in recent months.

“Making TikTok by playing loud music creates a nuisance for pilgrims from all over the world who come to the birthplace of Gautama Buddha,” says Sanuraj Shakya, a spokesperson for the Lumbini Development Trust which manages the shrines in Lumbini.

“We have banned TikTok-making in and around the sacred garden, where the main temples are located,” he told the Rest of the World tech news site.

Where else in Nepal is popular with TikTokers?

Reports suggest that much of the TikTok tourism is domestic.

Nepalis citizens spent long stretches of 2020 and (for those living in the Kathmandu Valley) 2021 in lockdown during the COVID pandemic.

Tiktok’s star was on the rise globally, but with hours stuck inside, younger generations in Nepal took to the video-sharing platform in a big way.

According to a nationwide survey this year, the number of respondents with internet access who reported using TikTok lept from 3 to over 55 per cent in just two years.

Once lockdowns were lifted, people set their sights on the Himalayan nation’s most scenic locations.

And it’s not just sites of religious and historic interest that caught tiktokers’ eyes. Agricultural fields in the south have also been deemed a good backdrop for some content creators - to the dismay of farmers.

“Look, they walk here, they destroy everything, they trample my rice shoots,” says farmer Jayaram Thapa.

“What could I tell them? I tell them to stop, not to damage my fields, but they dance. They tell me they are not doing anything wrong.”

Tiktokers have even been blamed for traffic jams after flocking to one street decorated with colourful umbrellas in Kathmandu, designed to entice tourists after the COVID slump.

Last year the management committee of Boudhanath - where pilgrims walk clockwise under the protective eyes of Buddha - installed CCTV cameras to ward off influencers. Security guards were also brought in to enforce the rules in March 2021.

Watch the video above to see more from Nepal's tourist sites which are banning TikTok.