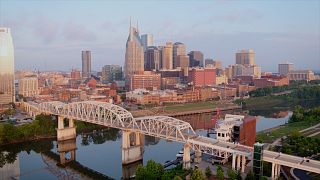 Nashville may be known as Music City, but there’s more to this Tennessean gem than the Country Music Hall of Fame.

Emerging music from the 1950s and 1960s such as soul, rhythm ‘n’ blues, gospel is intertwined with the advancement of the civil rights movement from the same time.

At the National Museum of African American Music, exhibits document how instruments, sounds and artists worked together to create the soundtrack of the civil rights movement.

“The transformational agency that occurs with music and music production is something we celebrate when we talk about the civil rights movement and music here,” said Katie Rainge-Briggs, exhibitions and collections manager at the museum.

How did Nashville influence the civil rights movement?

Fisk University is where many leading young civil rights figures of the 1960s were educated and it made Nashville the epicentre of the fight for equality. The city’s contributions are documented in the National Public Library Civil Rights Room.

“I think the most important thing is the impact that Nashville had on other places in the Civil Rights Movement,” said Elliott Robinson, program specialist at Nashville Public Library.

Nashville was key in influencing the Freedom Summer in Mississippi and Nashvillians took part in the Freedom Rides of 1961, as well as the peaceful sit-ins to protest against diner segregation at the original F. W. Woolworth.

“They knew that they weren’t doing it for themselves,” said Robinson.

“They were doing it for the generations to come.

Food has always been at the heart of Nashville’s thriving community spirit. It is the joy of food that brought people together from across dividing lines in the 1950s and 1960s.

“Southern food and cuisine played a huge role in bringing politicians and young activists together,” said Andrea Blackman, chief Diversity, Equity, and Inclusion officer for the city of Nashville.

“They believed that if we could break bread together then we could change the world together.”

In present-day Nashville there are 32 nationalities that have made the city their home, creating a diverse community which is represented in the culinary delights available to visitors and residents alike.

Nashville is as vibrant and ever-changing as ever and we can’t wait to see what’s in store next for Music City.