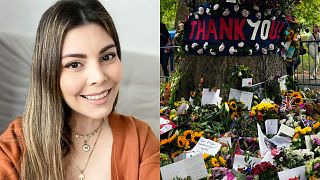 When Maricela Nuñez heard that Queen Elizabeth II had died, she burst into tears. Then, she booked a flight.

The 34-year-old event planner from Mexico has flown more than 8,000km to pay her respects to the late monarch.

The ambitious trip is about commemorating Queen Elizabeth. But it’s personal, too.

By being in the UK for the Queen’s funeral, Maricela fulfils a promise she made to her own dying grandmother.

“I knew it was something that I had to do.”

Why did this Mexican woman fly to the UK for the Queen’s funeral?

Searches for travel to London have surged since the death of Queen Elizabeth II, as royalists and mourners flock to the city.

Maricela - who lives Monterrey, Mexico - will be amongst them.

She flew to the UK on Saturday, three days after the Queen’s death.

“It was very important for me to be here, because I really admired the queen, I think she was an incredible human being, she was a superhuman,” she says.

“At a time when women couldn’t do as much she was the head (of state).

But as much as Maricela mourns the Queen, the trip is more about her own family.

“My grandmother was Queen Elizabeth’s biggest fan,” she explains.

“She loved her so much. She knew so much about her. Even though she didn't speak English.

“Days before she passed away, she made me promise her that I was going to meet the Queen at some point.

“At this point, she was very ill, and obviously, that's not how it works. You don't get to decide when to meet the Queen. But I said yes anyway.”

So when the 34 year old heard that the Queen had died, she knew what she had to do.

It hasn’t been cheap - though a generous royalist is hosting her for free - the airline ticket set her back “thousands” of dollars. To make up for it, she is cancelling a trip to Europe that was planned for later in the year.

But it’s worth it, Maricela says.

“I have mixed feelings of course, but I’m just happy I can fulfil my promise in a way,” she explains.

How many people are flying into London for the Queen’s funeral?

As the capital of the United Kingdom, London is the centre of commemorations.

Mourners have lined the streets in their thousands to watch the Queen’s coffin procession pass by.

As of Friday afternoon, the line to see the Queen’s lying-in-state is roughly eight kilometres long. It takes queuers up to 13 hours to reach the front.

World leaders and dignitaries will fly into London this week to mark the Queen’s passing.

So too, the data suggests, will ordinary people.

According to travel search agent KAYAK, global flight searches to London during the mourning period have increased by 129 per cent.

Between 8 and 13 September, nearly two million people searched for flights to London airports before the funeral.

This figure - provided by online travel search engine Kiwi.com - is double the number of searches in the same period last year.

Around the world, people are researching flights to the UK, booking up last-minute tickets for the chance to be in London during the momentous event.

Maricela will spend her trip visiting the royal sites - and laying some flowers on her grandmother’s behalf.

“If she (my grandmother) were still with us, I would have brought her with me,” Maricela says.

“I wouldn't be here alone. She would be here with me.”