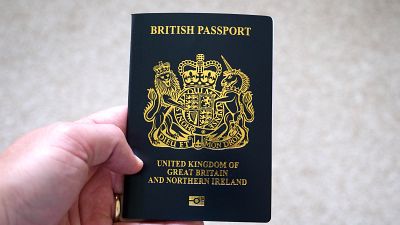 Wording inside the front of British passports mentions Her Majesty the Queen.   -   Copyright  Unsplash
By Rosie Frost  •  Updated: 20/09/2022

The death of Queen Elizabeth II has sparked questions about whether UK passports will need to be changed and even if they are still valid.

Her Majesty died on Thursday 8 September at Balmoral in Scotland and has been succeeded by her son, King Charles III.

Her death has led to uncertainty about official documents and papers which use her name as a guarantee.

Where does Queen Elizabeth II feature in UK and Commonwealth passports?

On their opening pages, British passports contain the words: “Her Britannic Majesty’s Secretary of State requests and requires in the name of Her Majesty all those whom it may concern allow the bearer to pass freely without let or hindrance and to afford the bearer such assistance and protection as may be necessary.”

The Queen is also mentioned in messages on the front pages of passports from New Zealand, Canada, Australia and other Commonwealth nations.

New Zealand for example has the words: “The Governor-General in the Realm of New Zealand requests in the Name of Her Majesty the Queen all whom it may concern to allow the holder to pass without delay or hindrance and in case of need to give all lawful assistance and protection.”

This is also repeated in Māori, referencing the Queen as “Kuini Erihapeti Tuarua”.

It has led to questions on social media about whether passports are still valid with this wording that mentions the Queen. One Twitter user asked if they will now have to have their passport changed following her death.

Can I still use my passport now the Queen has died?

The simple answer is yes. While the wording in the front of these passports will have to be altered to reflect King Charles III taking the throne, it is likely to be a gradual change.

Much like stamps, coins and all of the other ways the Queen’s iconic image has made its way into UK life over the last 70 years, updating passports won’t be a speedy process.

People with passports that make mention of Her Majesty will only have to change them once they expire and are up for renewal - usually 10 years from when they were issued.

Despite the Queen’s death, they will still remain valid for travel until that date.

New passports will likely have changed wording that tweaks “her” to “his” to reflect the new King. But no date has been given yet for when this change will be made.

They say that passports remain valid and wording will change in the future to reflect the accession of His Majesty King Charles III.