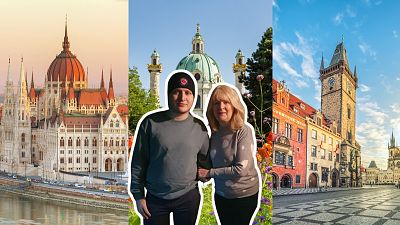 Drifting across the Danube River on a warm evening, Budapest’s majestic Parliament Building to the right of me, it’s no exaggeration to suggest that I felt like my whole life had led to that moment.

Sat there alongside my grandmother and a couple of our fellow travellers, we soaked up the scene. The grey skies of the UK seemed a world away, and I couldn’t imagine wanting to be anywhere else.

This was the first time in my life I’d been able to choose a holiday destination. Knowing that I was keen to explore more than just beach holidays, my grandmother gifted me a brochure of coach trips for my 16th birthday. She told me that she’d pay for us to go on one, and I selected a Central European trip.

The plan was to travel through France and spend a night in Germany. We would then city-hop through Vienna, Budapest and Prague, spending our final night in Germany before returning to the UK via France.

Not the usual demographic

When I thought of coach trips, buses full of young people didn’t exactly spring to mind. I imagined rows of middle-aged couples on their way to the Italian Riviera - but I was excited for the opportunity and grateful to my grandmother for paying for the trip.

Being 16, my primary concern was about the internet. Would I have WiFi travelling across Europe? I wanted to make sure I could keep in touch with my then-girlfriend and keep up with the latest football transfer gossip. My parents, of course, ordered me to keep them updated too.

On our way down to the south coast to catch the ferry from Dover to Calais, it became apparent to me that I was the youngest there by some forty years. I was there for the culture and the new experiences though so it wasn’t something that phased me.

My grandmother and I had our supplies: me with my phone and tablet, and her with her phone and a supply of digestive biscuits. In between bouts of Football Manager on my tablet, I would help her to compose texts to her partner, letting him know we’d arrived in each new city.

Our tour guide throughout the journey was a personable Irish lady called Angela. She was always chatting to everybody on the coach, making conversation about anything and everything. She instantly made us feel at home.

During an excursion to Prague Castle (the largest ancient castle in the world) me, my grandmother, and Angela were sat together on a bench. We talked about our respective families.

“So, are you the baby of the family?” Angela asked me.

“Oh dear!” guffawed Angela, falling backwards with laughter, “I thought you were his mammy!”

Not everyone gets the chance to go on a coach trip like this with a grandparent. Throughout the trip, we kept having to drop into conversations that she wasn’t my mother. We spoke to most of our fellow travellers at one point or another, most often during our evening meals at the hotels.

In Prague, we shared our table with two older ladies. They asked me all manner of questions about my education, including the subjects I was set to study for my A Levels. After each one, they both exclaimed “Oooh!” in unison, every time with more emphasis than the last. They were most excited to hear that I wanted to become a journalist.

Prague was our last city, and perhaps my favourite. I enjoyed wandering around the Old Town, marvelling at the timeless beauty of the Astronomical Clock, but before long we had to start our journey home. It was time for another night in Germany.

Making our way through the breathtaking countryside, I could tell that where we were about to stay would be a far cry from the cities that had been our home for the past few days.

We hurtled down the winding roads — a real change from the Autobahn — before stopping right beside the Moselle river. It was a beautiful sight, like something out of an old fairy tale and I felt cut off from the rest of the world in this little corner of Germany.

The hotel wasn’t exactly what I was expecting. In this old building, we were greeted with the heads of wildlife mounted on walls and a lack of WiFi. Once we got into our room, however, I was immediately distracted by my grandmother trying to close the curtains which fell down around her causing a cacophony of sound.

With nothing else to do, I decided to lie in my bed for a while and take in the events of the week. Before long I’d be back in the UK, back to normality but I knew that there was so much of Europe I still had to explore.

Is this the most over the top Christmas house in Europe?

What does Brexit mean for those travelling to and from the UK?