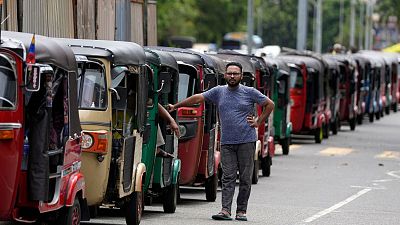 Sri Lanka remains under a nationwide curfew after violent anti-government protests erupted across the country in March.

The island nation is a popular destination among backpackers and holidaymakers, so what does the security situation mean for travellers?

The UK is now advising against “all but essential travel” to the south-asian nation, in line with Ireland, Australia and New Zealand.

As a result of the Foreign and Commonwealth Office update on Friday, Tui has cancelled all holidays to Sri Lanka until at least the end of the month.

The operator adds that “this advice does not apply to customers transiting through Sri Lanka’s international airport and customers currently in resort can continue to enjoy their holiday as planned.”

Here’s what you need to know about the country’s ongoing political and economic turmoil - and what to do if you’re currently in Sri Lanka or are planning a trip.

Over the last few months, an unprecedented economic crisis has led to shortages of essential goods like medicine and cooking gas, as well as widespread power cuts.

Mass demonstrations against the government broke out in late March, with protesters clashing with government supporters and armed police. More than 200 people have been injured and at least eight killed during the unrest.

A new interim Prime Minister, Ranil Wickremesinghe, was appointed on Thursday after Mahinda Rajapaksa resigned on 9 May. But protesters are also calling for his brother, President Gotabaya Rajapaksa, to step down. Thousands of people have been demonstrating outside his office in the capital, Colombo.

Protesters have also burned dozens of houses and cars belonging to senior politicians.

Sri Lanka’s economic crisis is bound up in its status as a major tourist destination. The country’s foreign currency reserves have virtually run dry, partly because of the dearth of tourist trade during the pandemic.

Wickremesinghe has proposed privatising the loss-making national carrier Sri Lankan Airlines in a bid to help stabilise the nation’s finances.

How to stay safe

The Sri Lankan government announced a “state of emergency” on 6 May. This means they have the authority to make security announcements - such as curfews - at short notice.

Make sure to check local news and official updates regularly, as well as referring to your own government’s travel advice.

Foreign governments, including the UK, have advised visitors already in Sri Lanka to avoid protest areas, as demonstrations have sometimes become violent and police have responded with tear gas and water cannons.

The protests have been centred around the capital, Colombo, with several violent incidents taking place in the Galle Face area. But be careful wherever you go, because unrest is present throughout the country.

Can you go out in Sri Lanka despite the curfew?

Under the curfew, going out and about is not allowed.

​​Sri Lanka’s Tourism Development Authority has advised tourists to stay in their hotel or accommodation until their departure flight.

The authorities say travellers can show their passports and airline tickets to get past the curfew on their way to the airport.

It’s a good idea to check with your airline and taxi company before setting off, as widespread strikes may also cause disruption to journeys.

Will my holiday be cancelled?

Sri Lanka is often described as a “year-round destination” due to its warm climate, so many people may be planning a visit over the summer months.

Tui has decided to cancel all holidays until 31 May, in light of the stricter FCDO advice. “We will be proactively contacting all impacted customers in departure date order to discuss their options," the operator said yesterday.

Despite the unrest, not all tour operators have not cancelled scheduled trips to the country, but some have changed itineraries to include more time at coastal resorts, which are further away from protest focal points. It’s always worth asking the company you booked with.

If you decide you want to cancel your holiday yourself, bear in mind that travel insurers are unlikely to cover you, especially if your home country has not advised against travel to Sri Lanka.

Are there still COVID-19 restrictions in Sri Lanka?

Those who still wish to travel to the country need to fill out a Health Declaration Form and buy COVID-19 insurance for around €11.50.

Fully-vaccinated visitors don’t have to take a pre-departure PCR test, but unvaccinated travellers must take tests before departing and upon arrival.