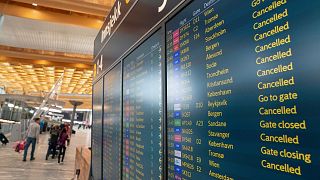 Scandinavian Airlines (SAS) is cancelling around 4,000 flights this summer due to staff shortages, the carrier announced yesterday.

5 per cent of SAS’s planned journeys will no longer go ahead, affecting passengers travelling between Copenhagen, Oslo, Stockholm and the rest of the world.

It is another setback for the aviation industry, which is struggling to handle tourists’ renewed desire for global travel after the pandemic forced a cut in workforce numbers.

The axed flights will fall between May and August, so those booked with SAS should keep an eye on emails to see if their journey is still happening.

“The vast majority of travellers won’t be affected by this, other than they will be rebooked to a flight within a few hours or on the same day,” SAS press officer Karin Nyman told the Swedish newspaper Dagens Industri.

SAS has confirmed the flights will be spread across all geographical areas, including domestic flights in Norway, Sweden and Denmark. With routes all over Europe, and as far as Tokyo and Los Angeles, a lot of different routes could be impacted.

Why has SAS cancelled 4,000 summer flights?

Nyman said that staff shortages and delayed deliveries of new aeroplanes have led to cutbacks.

The situation is far from isolated. Yesterday more than 100 British Airways flights to and from London Heathrow were again cancelled, as its resourcing issues continue to cause daily disruption for passengers.

“We have tried to resolve this situation as well as possible, by cancelling now in advance to take care of the passengers affected by this,” SAS' public relations director Knut Morten Johansen said on Norwegian TV this week.

“It is a demanding summer after the pandemic. We would like to be without both the pandemic and the Ukraine war,” he added.

Pilots' unions have hit back over the way that airlines have managed their workforces, however. As many as 40 per cent of SAS staff are reported to have been laid off during the pandemic.

Roger Klokset, leader of the Norwegian SAS pilots’ association has described the situation as a “foretold disaster.” Being slow to rehire staff “has led us into the situation we see now, because we have not managed to get enough people in on time,” he claimed on NRK News.

SAS’s finances shed further light on the situation. A report from the airline in February revealed that its revenues were down by 42 per cent in the three months leading up to January 2022 when compared with pre-pandemic figures from 2019. The growth of Norwegian airline Flyr is also making the Nordic market more competitive.

Cutting the number of flights is no bad thing from a climate point of view, however - and has been a long-term demand of climate action charities and organisations like Possible and the Stay Grounded Network. The former has even argued that reducing flights is compatible with creating jobs.

What can you do if your SAS flight is cancelled?

All affected passengers will be contacted directly or via their travel agency, a spokesperson for SAS told Euronews Travel today.

The affected passengers will be rebooked to their destination on other flights with SAS or a partner airline - typically within a few hours from the original flight booking, or on the same day.

“​Our main focus is now to make sure these adjustments are planned, communicated and carried out in a manner that can minimise the negative impact on our customers’ travel plans,” they added.

If SAS can’t find a suitable alternative, you are entitled to ask for a refund.