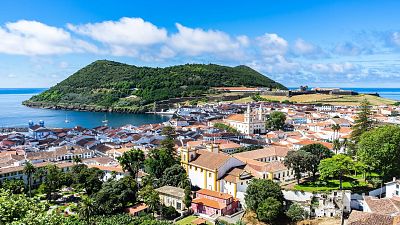 Sao Jorge, in Portugal's Azores, is bracing for what could be a major natural disaster.

The mid-Atlantic island has been rattled by thousands of small earthquakes in recent days, and there are fears that the more than 10,000 tremors recorded since last Saturday could trigger a volcanic eruption or a powerful quake.

About 200 of the recorded earthquakes, with a magnitude of up to 3.3, have been felt by the population.

Patiently waiting for a flight back to the lush green mid-Atlantic volcanic island he calls home, hotel owner Filipe Azevedo is feeling fearful.

"We are all very anxious," 42-year-old Azevedo said at the airport gate in Sao Miguel, Azores' biggest island, a short plane trip away from Sao Jorge. "It is a phenomenon for which we are not prepared...we are all very scared."

Azevedo is worried the uncertainty could hurt his hotel business, which is still recovering from the impact of COVID-19.

"It is empty and it will remain empty," he said of the hotel. "Everyone is cancelling."

There is a "real possibility" the volcano could erupt for the first time since 1808.

The region's CIVISA seismo-volcanic surveillance centre raised the volcanic alert to Level 4 on Wednesday, meaning there is a "real possibility" the volcano could erupt for the first time since 1808.

With around 8,400 residents, Sao Jorge is one of the least populated of the nine islands that make up the Azores.

The region's emergency plan has been activated, and all is prepared to evacuate locals if needed, authorities have said.

Dozens of nursing home residents and those hospitalised in Sao Jorge's Velas municipality, likely to be the most vulnerable, have been transferred to Calheta, on the opposite side of the island.

In Velas, people living on the so-called fajas, small plains at the bottom of cliffs originally created by lava or landslides, have been told to leave.

"We are living moments of anguish, of some fear," Velas mayor Luis Silveira said late on Friday. "We have been asking people to keep calm but it is becoming harder."

Silveira said there was still no need to evacuate all residents but many have left the island on their own terms. Local government figures showed around 1,250 left Sao Jorge by air or sea in the last two days.

I'm scared to death, not just for myself but for everyone who lives there.

Brazilian Kelly Fonseca was one of them.

"I'm scared to death, not just for myself but for everyone who lives there," in Sao Jorge, said 41-year-old Fonseca, a restaurant worker who moved to the Azores in search of a better life. "It's hard."

"I will only leave my house as a last resort," said Luis Mendonca, 52, at the local pharmacy in Velas, which remains open. "It's not like they will touch a button and the bomb will go off. It will evolve slowly."

CIVISA said there was "no evidence that a volcanic eruption was imminent" but said the possibility should not be discarded.