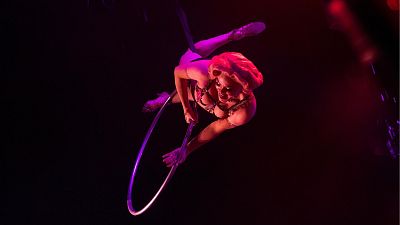 The carnival world of Lucha VaVOOM, a flamboyant mix of American burlesque and Mexican wrestling, is stunning audiences once again after a two-year pandemic hiatus.

Many people who filled the Mayan theatre in Los Angeles in February for the Valentine’s Day themed show are seasoned veterans of the spectacle.

“It’s my seventh show,” said Clix, an artist who traveled from Arizona to mark the occasion.

When COVID-19 began ripping through the US in early 2020, public venues across California were shut down. The cast was sent home but continued to practice their craft.

“It feels really strange to come back, so much has happened in that time, but we've been ready,” said Veronica Yune, a burlesque artist. “We're ready to unleash."

What’s the show all about?

The beauty of this show is that it keeps audiences guessing. With masked performers, it’s a mix of wrestling and burlesque, with a dash of comedy thrown in for good measure.

“It’s like the magic of people not knowing who is out there,” said El Chupacabra, a wrestler inspired by a folklore character who resembles a reptile. “The magic of the costume is important to people.”

It feels really strange to come back, so much has happened in that time. We're ready to unleash.

Veronica says the show is unlike anything people can find elsewhere, and a place where the troupe can fully express themselves.

"The energy is just something else and the crowd is willing to accept anything that we give them, and that's where we get away with so much because we get to be our weird selves. And they enjoy it, so as long as they enjoy it we'll keep doing it."

Watch the video above to see the unique mix of wrestling and burlesque in action.