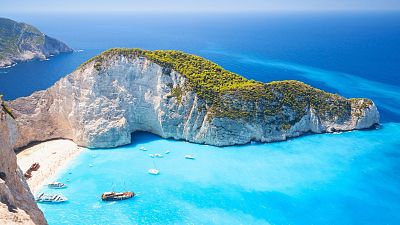 Greece is in the process of passing one of the EU’s most ambitious new climate laws. By 2030, it plans to cut greenhouse gas emissions by 55 per cent, and by 2050 Greece plans to be fully net zero.

But it can only achieve this by turning all of its 200-odd inhabited islands green and, in the process, create Europe’s largest network of sustainable off-grid communities.

The picturebook Greek island, with its whitewashed houses and sleepy harbour, turns out to be a heavy polluter. Most Greek islands use oil generators for their power. The worst offenders, including Santorini, still use mazut, a heavy low-quality oil that has been phased out by many western European countries.

Smaller islands often borrow power from larger ones, but this too is unsustainable. In Hydra, power outages are common despite its supply from the much larger Peloponnese peninsula.

Hotels on the island now supply guests with torches for when blackouts occur.

Santorini still uses mazut, a heavy low-quality oil that has been phased out by many western European countries.

A dodgy power supply hinders one of the central pillars of the Greek government’s plan to decarbonise and revitalise the country’s economy, dubbed “Greece 2.0.” The government desperately wants to spawn a tech industry that will create jobs and attract foreign investment. It has already passed laws for digital nomads and started building a 5G network to get things off the ground.

Power outages could yet bring the whole plan down.

“The internet is great, but sometimes my power cuts out just when I’m on a Zoom meeting,” says Boris, a management consultant from Paris working remotely on Hydra.

What is the government doing to improve energy supplies?

Rather than propping up old infrastructure, Greece’s government wants a green solution. “We're going to turn our islands into full green and energy-autonomous destinations,” says a government minister.

Wind and solar power are central to this plan, but unlike other countries, they cannot just be dotted anywhere. Planting a wind turbine on Santorini, where thousands of tourists watch its famous sunsets, could do more harm than good to the local economy.

“But close to Santorini, you see two uninhabited islands. So on their non-visible part, not to affect the view and the landscape from the Santorini Caldera, you could have solar panels or small turbines, not more than 35 metres high,” says George Kremlis, Principal Advisor to the Greek Prime Minister.

These turbines could be connected with underwater cables and bring clean energy to Santorini.

There are around 3,000 other uninhabited Greek islands that could turn into renewable power plants, with wind and solar turbines to power their larger neighbours. There are also plans to install new desalinators to cut the islands’ reliance on “nerouládes”, or water tankers that come weekly with supplies of freshwater.

Greece has one of the highest consumption levels of mineral water in Europe at 133 bottles per capita in 2019, according to Natural Mineral Waters Europe.

Tilos is leading the way

The prototype for this green off-grid plan is Tilos in the Aegean Sea. Last year, the island was the first in Greece to go fully off-grid on green energy. A combination of wind and solar power along with battery storage meant the island could cut its reliance on nearby Kos for electricity.

“We want Tilos to be the beacon for other European islands, other Greek islands,” says the island’s mayor, Maria Kamma-Aliferi.

Astypalea, another island in the Aegean Sea, is following its example with a pioneering project to phase out all combustion engines. All vehicles on the island will soon be electric, using renewable power, thanks to an investment from Volkswagen.

All vehicles on the island will soon be electric, using renewable power.

A similar project is being rolled out on Chalki, near Rhodos, with help from Citroën.

“Governments can't deliver on their own and the private sector isn't the answer to every question,” Greek prime minister Kyriakos Mitsotakis said in a statement.

But who’s going to pay for it?

Not only are these investments proving the future of off-grid technology, they are needed to ensure tourism continues on the Greek islands, says Kremlis. “I don't know many people who are travelling to carbon neutral islands because of environmental considerations now, but in the future I do believe this will become much more attractive as a ‘green habit’.”

Some islanders are more sceptical, however.

“Who’s going to pick up the bills then?” asks George, a taverna owner in Hydra. Greece is already the EU’s most indebted country, he says, it cannot afford to borrow more money.

And yet the government is not only planning to borrow more but is working on the largest investment in the country’s history. Up to €113 billion in loans, investment and government funds has been earmarked for ‘Greece 2.0’, which includes a number of infrastructure projects.

When the national energy and climate plan (NECP) was put out for public consultation last month, the government received hundreds of comments on its plan to turn the country carbon neutral. This has resulted in a delay, as the bill is revised, before it is tabled to the Parliament for adoption.

Despite concerns, however, the law is expected to be enforced later this year, putting Greece on track to become one of Europe’s greenest, but still most indebted countries.