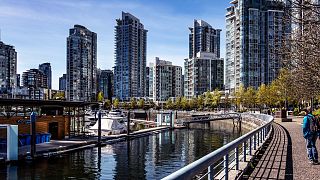 Canada's Vancouver is the city with the highest number of eco-friendly hotels.   -   Copyright  Canva
By Giulia Carbonaro  •  Updated: 11/02/2022

Travelling with an awareness of the climate crisis isn’t always easy or straightforward.

In the face of an emergency that’s so urgent it’s forcing even the most unwilling to pay attention, those who want to keep exploring the world have to do much more research than they used to before booking their holidays.

You might pick a train instead of a flight when possible, but have you considered how sustainable your accommodation is?

Don’t worry if you haven’t, we’re here to make this easier for you.

Here’s a list of five cities with the highest number of sustainable hotels in the world, according to energy comparison site Uswitch.

Finding sustainable accommodation shouldn’t be hard at all in Vancouver, where 44 per cent of hotels are eco-friendly.

You probably won’t be surprised that the Canadian city claims the top spot here, as the city has been voted the greenest in the world only last year. Vancouver has been praised for its efforts to reduce its carbon footprint and for increasing its recycling from 40 per cent to over 60 per cent in just a decade.

And big on recycling are also its hotels, among which the five-star Fairmont Waterfront stands out.

The hotel, which overlooks Vancouver’s harbour and is known for its efforts to be gentle to the environment, is home to 250,000 honeybees, offers organic menus to its diners and disposable-free options.

In case you can’t travel to the other side of the world, you’d be happy to find out that the second city with the most sustainable hotels in the world is right here in Europe.

With a goal of becoming fossil-free fuel by 2040, Stockholm is already considered one of the greenest cities in Europe and a pioneer in sustainable development.

Over 40 per cent of its 216 hotels have received the sustainable badge on Booking.com.

Among these, it’s worth mentioning the Elite Eden Park Hotel, one of the first accommodations to be awarded the title of ‘Leadership in Energy and Environmental Design-certified’ in Sweden’s capital.

The hotel has recently introduced charging points for electric vehicles in its car park, in an effort to encourage guests to adopt greener ways of transport.

We’ve got to give it to Canada, the country is pretty good when it comes to sustainable hotels.

Twenty-five per cent of hotels in Toronto are listed as eco-friendly. The city’s zero-waste 1 Hotel is particularly interesting for those trying to reduce their carbon footprint: the hotel has a pledge to save 85 per cent of its waste from landfills and has an on-site composting facility (which ideally you can’t smell from its rooms). Their food is also entirely sourced from local farmers within a 100 km radius from the building.

If that didn’t impress you enough, the hotel is also an example of sustainable architecture: both the interior and the exterior of the building are made of repurposed elmwood from dismantled barns.

You’re probably starting to notice a pattern by now.

Over 23 per cent of hotels in Calgary are sustainable, with accommodations working hard to ensure efficient recycling operations, local products and energy-saving practises.

In the spirti to minimise energy consumption, Le Germain Hotel in the city has recently switched to geothermal heating and cooling to keep its rooms up to the perfect temperature while keeping away from fossil fuels.

This is the last Canadian one, we promise.

Another Canadian city snatches the fourth position, with Edmonton counting over 22 per cent of its hotels as eco-friendly.

The city is also widely considered the country’s most sustainable overall.

What if I don’t want to go to Canada?

There are other options.

Following the top five ranking cities, there are Pakistan’s Lahore, Colombia’s Medellin and Bogota and Ekurhuleni and Johannesburg in South Africa.

If you’re looking to stick to Europe, we warn you: there’s only one other city in the top 20, and that’s Munich in 14th position.

Might be a good excuse for a long-due trip outside the continent.