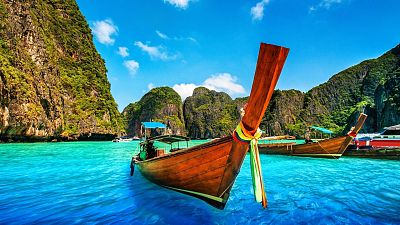 Maya Bay, a Thai paradise made famous by the 2000 film The Beach, has just reopened after being closed to tourists for four years.

The film, which sees Leonardo DiCaprio’s character trek through the jungle to discover the mythical beach, made Maya Bay one of the biggest tourism hotspots in the world. Soon the film’s international audience were clamouring to visit and take selfies in their thousands.

Tucked away on Ko Phi Phi Le island in the Andaman Sea, by 2018 close to 6,000 people a day were flocking to see the turquoise waters and bright white sand. Many more than this formerly pristine and protected area could cope with.

The majority of tourists travel from neighbouring Koh Phi Phi and Phuket islands, with most taking speedboats chartered by local tour operators. This has proved a huge problem for the island, with boat anchors and washed off sunscreen estimated to have destroyed up to 50 per cent of the coral in its surrounding waters.

Things came to a head in 2018, after a national outcry from Thai citizens and the bay was abruptly closed. As well as destroying coral, tourists had also left behind vast swathes of plastic litter and damaged local flora and fauna.

The closure was initially set to be temporary, but a closer look at the damaged ecosystem led park officials to realise that the bay needed much longer to recover. The closure was then extended to four years.

"Maya Bay has been continuously receiving interest from tourists around the world. But this has also caused (the natural area) to deteriorate, especially the corals," said Natural Resources and Environment Minister Varawut Silpa-Archa in a statement to CNN.

The break has also given Thailand time to decide on new rules and protocols, including strict limits on how many people can visit the bay at any one time.

Maya Bay reopened to tourists on 1 January, but from now on only eight speed boats are allowed to dock here at any given time. There’s also a limit on tourists too, with numbers capped at 300. Each visit is limited to one hour and has to be between the hours of 10am and 4pm.

Currently, snorkelling and swimming are also banned, and boats are unable to enter the bay itself.

Currently, snorkelling and swimming are also banned, and boats are unable to enter the bay itself. It is hoped that this will allow newly planted and existing corals to continue to grow and recover. Instead, visitors will be dropped off at a nearby pier and make their own way to the beach via a new broadwalk that is intended to protect plants and sand in the area.

"After shutting down Maya Bay to revive and restore it, up until the present, it has returned to a good condition," says Minister Varawut Silpa-Archa.

Tourists return to The Beach

Tourists and influencers wasted no time in returning to the pristine sands of Maya Bay, with one travel blogger commenting that nearby Lo Sama Bay was now being used as a Maya Bay ‘car park’.

The downside to the reopening of Maya Bay is certainly the way Lo Sama Bay is being treated. It used to be a quiet beautiful spot for snorkeling, now it’s become a parking lot. I wish I had a magic wand and solve the matter, it can only get worse once mass tourism come back. pic.twitter.com/71ygm8tdcl

Since reopening its borders to international tourists in November 2021, Thailand has been keen to stress that it wants to attract "high-end travellers, rather than a large number of visitors.”

Time will tell whether Maya Bay will be able to avoid the mistakes of the past, or whether, much like Leo’s beach paradise, things will take a turn for the worse again.