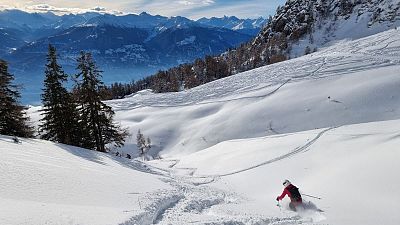 Tumbling headfirst into a huge pillow of snow I curse my skis for being totally inappropriate for the conditions. Too long, too skinny. After digging out a ski buried in thigh-deep powder, I resolve to exchange them for something more suitable.

Crans Montana, the Swiss ski resort stretching from the Rhone valley to Plaine Morte Glacier at 3000 meters is said to be the sunniest place in the Alpine country. And today it's certainly lived up to its reputation.

Yesterday, however, the destination that was once the home to former James Bond star, Roger Moore, was grey and cold. Its views over a string of mountain peaks that unfold from Bietschhorn to Mont Blanc via the Matterhorn, blocked by non-stop snowfall, leaving little distinction between skiing on or off-piste.

This week much of the Alps and the Pyrenees have experienced similar conditions: "best snow ever," I hear all around me; "it's dumping down!" others cry.

It's not every day you start the ski season with what's reaching record snowfall levels for this time of year. It seems we are being rewarded for having to hang up our planks last season, as ski resorts around Europe locked down.

Although this heavy snowfall may be more to do with the Storm Barra weather system.

"We've had about 82cm," Benoit Python a wiry, sun-weathered ski instructor from the Swiss Ski School Crans-Montana says. "And over in Chamonix, they've had nearly 85cm!"

According to The Chamoniarde, Chamonix Mountain Prevention and Relief Society, France's world-famous freeride destination, that's just over 90km by road from Crans Montana, has not seen snowfall like this since 1966:

"I shovelled snow outside my house for 3 days on the trot," said local mountain guide, Andy Perkins, confirming the reports. "I skied some exceptional powder down to very low altitudes on 11th December".

"I was out today (14th December) at one of my regular pre-season snow test sites around 2400 metres, and the depth is more than 100cm greater than what I’ve seen on average in previous years!"

As I return from the ski hire shop in Montana with tighter boots and a change of ski, Benoit warns me I now have no more excuses: "You're like a golfer", he says, "they blame three things when their game goes wrong. Firstly, their clubs. Secondly, their clubs and finally their clubs!"

Given the resort is also famous for its golf course, Crans-sur-Sierre, Benoit should know all about this, I suppose.

We take the ski lift from Montana to the top station, Cry d'Er, from where Benoit guides us off-piste through snowy bowls and pine forests, their branches drooping under the weight of snow.

It's warm and the snow is deep, with us often putting in the first tracks. My legs haven't yet the stamina in them to last all day and I am more than ready for food and a sit-down.

We take a run down for late lunch on the slopes at Chetzeron, a former gondola lift station transformed into a restaurant and hotel.

The sustainable building is made from concrete recovered from a nearby ski slope combined with oak wood from local forests.

Here we fuel up on lamb served in cocottes--cast-iron cooking pots--with creamy polenta and delicious white and red wine from nearby Sierre.

I am very drowsy as we carefully ski back down to Crans, legs challenged by the moguls and tight forest paths.

We finish up with an apres-ski drink in Zerodix, its busy, but perhaps not as busy as usual for the start of the season.

The ski resort of Crans Montana was created through the fusion of the two centres of Crans and Montana, and over in Montana, the Bella Lui festival has been taking place.

The event honours the mountain legend of the Bella Lui star which transformed into a luminous fairy to guide a lost shepherd who was searching for his missing ewe one cold December night. Since then, those living in the village believed fairies were watching out for them.

For kids, this means there is a lantern path to follow through the Jack Nicklaus golf course and a treasure hunt, and for adults, there is the chefs market.

Here the local chefs pair small portions of dishes with local wines, such as fondues, Christmas turkey tacos, foie gras terrine, and deluxe hot dogs with a chilled glass of Fendant, Cornalin or a vin chaud. Good for warming you up after a spin on the Ferris wheel.

The following morning dawns bright and sunny and we are first up on the freshly groomed slopes, skiing the neat corduroy with barely anyone else about. It is Monday after all.

So we tear around the empty pistes, enjoying the space to take on some speed.

All this early season snow is great news in the long term. However, a warning from Perkins: "The weather forecast is stellar until at least 27th December when the busiest week of the year kicks off".

"In the run-up to 2022, enthusiasm for lift based off-piste skiing and ski touring is building like a pressure cooker" but, he says, this large quantity of snow is sat on a twitchy (unstable) base".

"While the good weather will consolidate the snowpack in some areas, in others it will make it even more unstable," So, he reiterates: "enthusiasm is great, but needs tempering with knowledge, judgement and good decision making in terms of avalanche risk assessment."

So if conditions look bad and there is a whiteout on the mountain, if you're in Crans Montana it's worth hitting the Alaïa Chalet.

Switzerland's largest action sports centre offers two halls, one with a training gym with an array of trampolines and airbags, and the other, a skatepark with a pump track, bowl and kicker with an airbag landing for skaters, skiers and snowboarders.

So sheltered from the storm outside, you can practice your skateboarding, freestyle skiing, snowboarding and BMX skills, year-round.