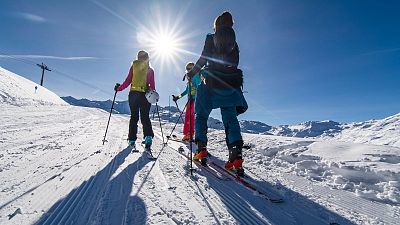 I arrive at Les Menuires just in time for France's 6pm curfew - and it feels like the apocalypse has hit the ski resort.

The station is a gateway to Les Trois Vallées, one of the largest and most famous famous ski areas in the world. It's usually bustling with people spilling out of apres-ski bars, packed restaurants, and skiers coming down off the mountains before the sun sets.

But tonight, not a soul is about, but incongruously cheery music can be heard playing from speakers in my hotel's empty terrace into the dark night, brightened only by the colourful lights dancing on structures in the empty plaza, where the bottom of the pistes meet.

At this time of the year when the February school holidays are underway, the resort normally welcomes between 16000 and 22000 people.

But right now, estimates the Director of Les Menuires Tourist Office, Marlene Giacometti "we have between 5,000 and 6,000 people, 30% of the usual".

I’m the only guest at the Hôtel Pelvoux and feel a little guilty accepting the solo member of staff's offer to bring out the cheese and charcuterie board for my breakfast.

After last night's take away pizza, and an earlyish night, I’m not that hungry, but rearing to head up the mountain.

Outside, the morning brings a more optimistic scene. There are energetic kids in their ski schools learning to snowplough and groups of locals getting their fitness hit by ski touring (hiking on skis which have a piece of fabric attached to the base of them to prevent them from sliding back) to the top of the empty lift stations and skiing back down.

And of course, people practising the increasingly popular sport of cross country skiing.

I grab a takeaway coffee outside the hotel where I meet my ski touring companion for the day.

Francesca Smith has lived in the Alps for nearly 12 years. "It’s a season like no other," she tells me. "I don’t think we will ever experience this again."

She used to run an 100-bed luxury catered chalet business, Powder and Shine. But first Brexit, and then the COVID crisis meant she had to let it go.

"The three weeks surrounding the day that the UK were due to leave the EU in March 2019 were exceptionally quiet because people were worried about crossing borders," Smith explains.

"Brexit also impacted how we recruited personnel (because of prohibitive employment costs) and COVID meant that the business was no longer viable."

She's now launching ski travel consultancy 'Mountain Spy' where she will act as 'your local guide to accommodation in the mountains', helping clients book high-end accommodation across the French Alps, Switzerland, Austria, and Italy, as well as providing news on resorts and trends.

I soon discover that Smith is a mine of information about Les Menuires. In the light of day, I can see clearly that the older part of the resort can hardly be described as a classic chocolate box Alpine one, but rather a fine example of high-rise apartments put up quickly in the 1960s and 70s for the sole purpose of skiing.

But I'm surprised to learn that the apartment building next to my hotel, called the ‘Brelin’ was built in 1972 and is actually listed as a work of ‘remarkable 20th-century heritage.’

According to its architects, its slender shape evokes that of a ship docked on a slant, a genuine “snow liner” that conjures up images of the old sanatoriums built in the sunny resorts.

We meet local ski guide, Coralie Gerrett in front of the Ski School Les Menuires, and because it's snowing quite hard and the visibility isn't great, we decide to stay safe and ski tour up the piste from La Croisette to Le Grand Lac restaurant.

The snow is still tinged from yesterday’s Sahara sands and it's fairly mild, so I’m soon stripping off to my T-shirt as we climb higher and higher up the mountain.

It feels like quite a privilege to be here at a time when so few others are about, even if an hour or two climbing up means only 20-30 minutes of skiing down.

I'm curious to know if many people are heading out into the wilder backcountry to go skiing. Coralie, also known as Coco, says most people are staying in the secured areas that the resort has prepared.

Whilst lifts aren't running, the ski patrol still opens a few of their 600km of pistes and ensures they are safe from avalanches.

Coco explains that people who usually go into the backcountry are less inclined to take the risk at the moment because if something did happen, and they had to call the rescue services, it's more expensive than usual.

"100 euros a minute for a rescue helicopter to come out," Coco reckons.

As a ski instructor, Coco received money from the government in December, when they decided to keep the lifts shut. But she tells me she's not sure what’s happening now.

Having grown up in Les Menuires, she's feeling ok about everything and happy to take time off as she had a baby four months ago. But her British husband Sam hasn't been able to work as a ski instructor at all this winter, instead, he's been enjoying split boarding with friends.

We reach Le Grand Lac at 2250 meters where we stop for a vin chaud. The buvette selling takeaway hot drinks and snacks outside the mountain restaurant only opened up two days ago for the school holidays.

Its owners, Bertrand and Nelly Cointy, bought the business in November and had to adapt their plans. They didn't see the point in opening earlier in the season and now only plan to stay open for the holiday period.

With visibility virtually at zero, we decide to stop here rather than continue to the top of Roc des 3 Marches at 2704 metres altitude.

The fresh layer of snow on the pistes, however, made for very pleasant skiing down and we get a few nice turns in before reaching Le Corbeleys restaurant.

Owners Bruno and Martine Suchet have also only just opened up for takeaway meals. Apologetic that they can't let us inside, they say they have to be very strict with hygiene and distancing measures, as the police came round the day before to check everything.

There are no seats outside, apart from an ornamental former chair lift, and we are offered blankets as we wait for our food.

As I feel my sweat start to go cold and chill me, I really miss being able to warm up in a cosy mountain hut between ski runs.

We order the local cheese tart (Tarte au Beaufort) and 'Rissoles,' a traditional Savoyard dessert, consisting of a crispy pastry 'slipper' filled with sweet cream, which we eat off disposable paper plates and wooden spoons

It's all washed down with more Vin Chaud, a coffee and finally a Genepi, a traditional Alpine aperitif to sharpen us up for the final descent.

With full stomachs, we eventually ski down to Saint Martin de Belleville. The pretty village resort is practically empty.

Its new wine bar and restaurant L’ART B is also offering takeaway, as is La Bouitte in nearby St Marcel. The three star Michelin restaurant, whose name translates from the local Savoy dialect as ‘little house’ is also serving guests meals in their rooms in its upgraded five star Relais and Chateau.

This certainly is a season like no other, I think, as I catch a ride back to Les Menuires, instead of being able to take the cable car back to the resort.

And while there is a special kind of atmosphere in ski resorts right now, no one wishes for the partial shut down to continue for much longer.

This amazing artwork was created by the ancient sport of snowshoeing