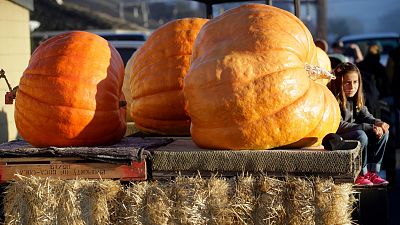 “It's been a long season,” admits Uhlmeyer, a veteran of the pumpkin growing world.

“I started the seed in April and I was able to pollinate it in mid-June. The pumpkin took off and this is what I ended up with.”

A post shared by Half Moon Bay Pumpkin Festival (@hmbpumpkinfest)

The contest has been held in Half Moon Bay, California, since 1974, when then-Mayor Melvin Mello challenged the town of Circleville, Ohio, to see who could grow the biggest pumpkin.

The tradition is now in its 48th year and attracts more than 50 growers each season.

According to the competitors, to grow a successful giant pumpkin you need superior seed lineage, rich soil, constant watering, mild temperatures, long days with plenty of sunlight, and lots of time in the pumpkin patch.

Last year, the annual contest - known locally as the ‘Super Bowl’ of pumpkin weigh-offs - was held without spectators because of pandemic restrictions.

Fans were welcomed back this year, much to the delight of Uhlmeyer and his competitors.

“It's kind of the granddaddy of pumpkin competitions. So it's a pleasure to be here and be part of this. Good growers in a good atmosphere, a good camaraderie.”