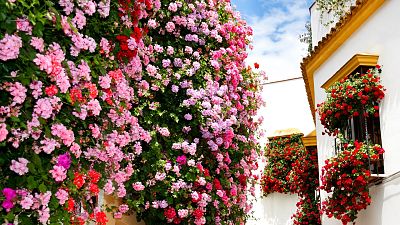 In the Spanish town of Córdoba, designer Shane Connolly is preparing an elaborate floral display.

He is just one of five world-renowned artists selected for Flora, an international flower festival which is returning for its fourth edition after a two-year absence.

Connolly is no stranger to high-pressure events. He created the flower arrangements for Prince William and Kate Middleton’s royal wedding at Westminster Abbey and Buckingham Palace.

But he has never worked in a location like Córdoba's cathedral.

"When I was first told that I could be in the Mezquita de Córdoba, I could not believe it. I was absolutely overwhelmed,” he says.

The city of flowers

Competitors in the festival must transform well-known locations around the city into beautiful floral displays.

A good meal is good for people, but sometimes a bunch of flowers given to your mother actually is the thing she remembers all her life.

He also wanted to emphasise that sometimes, flowers can do things that other experiences can’t.

“A good meal is good for people, but sometimes a bunch of flowers given to your mother actually is the thing she remembers all her life.”

The carnation heads in Connolly’s installation are floating in memory of people who died during the COVID-19 pandemic. The designer is inviting people to bring flowers and add them to his piece, defining it as an "interactive and spiritual experience."

Strength after the pandemic

The theme of the fourth edition of the festival is ‘Strength’ and other designers have chosen to reflect on the experiences of the last year too.

Like Connolly, Julius Værnes Iversen of the Danish floral design studio ‘Tableau’ has created an installation that embodies the resilience of people throughout the coronavirus pandemic.

His display ‘Time to move on’ aims to create the momentum needed to put COVID-19 in the past.

"The entire installation is a reflection of time, so we hope that the installation can actually push you forward in your life," says Værnes Iversen.

The moving piece consists of a rotating flower wall spinning clockwise, which takes one minute to complete a full circle.

Spanish duo Ines Urquijo and Nuria Mora have chosen a different direction for their piece. Their installation is named ‘Mirage reflections of paradise’ and is located within the archaeology museum of the city.

"We have used fruits and flowers with a very strong colour such as bougainvillea and dates to provoke visual pleasure,” says Urquijo.

To the side of the courtyard, a wall of mirrors immerses visitors on all sides.

"Based on some mirror sculptures, we have created a route for the visitor to see himself reflected in them," says Mora.

Other installations include ‘Interior strength’ by Belgian artist Tom de Houwer and ‘Desideratum: The force of a desire’ by Carolina Estévez.

An international jury will select the two best installations and award prizes of €10,000 and €25,000 respectively.

The Flora International Flower Festival runs from 15 October until 21 October 2021.

Should I visit Córdoba?

Covered by the hills of the Sierra Morena, Córdoba boasts an extraordinary mix of cultures which make it a truly unique place to visit.

The city is located beside the calming waters of the Guadalquivir, the second longest river in Spain, and enclosed by an impressive array of mountains, valleys and fields.

During its long existence, it rose to prominence as one of the most important cities in the world.

This historical background has left an exceptional legacy in Córdoba. It is now the European city with the most UNESCO world-heritage inscriptions.

A short walk around the city will uncover Roman bridges, labyrinthine alleyways and dramatic Moorish architecture.

The Great Mosque-Cathedral, known locally as the Mezquita, is Córdoba’s most renowned feature.

Built in several stages of the Omeyan style, the Mosque was later enlarged with a Christian structure of Gothic, Renaissance and Baroque influences.

Away from the city centre, the colourful gardens of Córdoba’s side streets are a favourite among visitors.

Every May, locals open up their patios for the Fiesta de los Patios, a competition in which gardeners compete for the most beautiful patio in Córdoba.