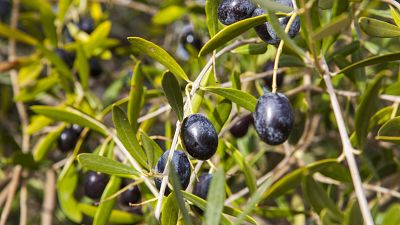 Cazorla olives   -   Copyright  Turismo Andaluz
By Andalucia  •  Updated: 26/02/2021
For those wishing to explore the origins of the region's finest exports, Andalusia provides all non-resident travellers with free Covid insurance for stays at any type of regulated establishment between January 1st and December 31st, 2021.

One of the quintessential Andalusian experiences is to sit in a sun-filled plaza under the shade of an orange tree, eating pescadito frito ('fried little fish'), prawns or clams, and sipping on a glass of chilled fino.

This largely coastal region has a richly deserved reputation for exquisite seafood, but what is perhaps less known is the bounty of fruit and vegetables produced on the fertile plains that run back from the sea; the vast expanses of 'dehesa' (pastureland where Iberian pigs roam); the vineyards, and the olive groves.

Much of this Mediterranean abundance makes its way to other parts of Spain, or is sent to other countries. Three of the region's major exports have a uniquely Andalusian flavour – its wines; its cured Jabugo ham; and the olive oil produced all across the region, but most notably in Jaén.

The sherry bodegas of Jerez are an intrinsic part of any Andalusia visit. More than the sum of their parts, and beyond the production of the wines themselves, the bodegas are architectural and cultural landmarks: meeting points for visitors and residents, and the stage for local events.

The word 'sherry' is an anglicised form of Xérez, the Moorish name for Jerez, and refers, in the English-speaking world, to a broad range of fortified wines that locally are divided into distinct categories.

'Fino' is the closest to table wine, a brisk, dry and pale variety of which 'manzanilla' is one type. 'Amontillado' is darker and less dry, though its sweetened version can no longer be known as amontillado and must be labelled as 'medium sherry'.

Similarly, 'oloroso', which is aged longer than fino or amontillado, and is richer and less dry, must be labelled 'cream sherry' if it is sweetened. 'Palo cortado' is similar, and finally there are the dense, sweet sherries, made with either moscatel or Pedro Ximénez grapes and known as 'Jerez dulce'.

Beyond sherries, however, Andalusia also has a proud winemaking tradition, producing whites, reds and rosés from the variety of grapes that thrives on its volcanic soil, including cabernet sauvignon, merlot, syrah and tempranillo for red wine, along with chardonnay, macabeo and sauvignon blanc for the whites.

There are two types of cured ham (jamón) produced in Andalusia: jamón serrano and jamón ibérico. The former simply means 'mountain ham', and refers to that produced from white pigs fed on a mix of pasture and grain. Serrano melts on the tongue, and is one of Spain's most popular exports, but the real cognoscenti will seek out ibérico.

Jamón ibérico must come from certain designation of origin (DO) regions, and most importantly from black Iberian pigs, who produce a richer, nuttier flavour of ham, particularly those pigs fed on a diet of acorns (this ham is known as 'jamón de bellota' – 'acorn ham'). This ham is also known as 'pata negra', in reference to the black feet of the pig.

There are two jamón ibérico DOs in Andalusia: Los Pedroches, in the province of Córdoba, and Jabugo, in the province of Huelva. A number of ham producers offer tours and tastings (see www.andalucia.org/en/eno-gastronomy/scents-and-flavours-of-andalusia/ham), and the Museo del Jamón at Aracena is filled with audiovisual exhibits covering mountain culture and every part of the ham production process.

The origins of 'liquid gold'

Andalusia produces more olive oil than any other region in the world, and the province of Jaén, in particular, is known as the "World Capital of Olive Oil", surrounded by 550,000 hectares of olive groves containing 66 million olive trees.

"Liquid gold", as the ancient Greeks called it, was introduced into the country by the Phoenicians and now forms an essential component of the local diet. In Spain olive oil is used extravagantly, drizzled across soups, salads and bread, turned into mayonnaise and alioli, and used for frying, for casseroles and for roasting.

Different types of olive bring out fruity, sweet, spicy or nutty flavours, with the most commonly used being picual in Jaén and hojiblanca and picudo in Cordoba. Tastings, explanations of the various grades (from plain 'olive oil' to 'extra virgin') and suggestions for how to use different types are offered by visitor centres throughout Andalusia, and provide another way to learn more about the history and geography of this bountiful region.

Getting back to nature in Andalusia