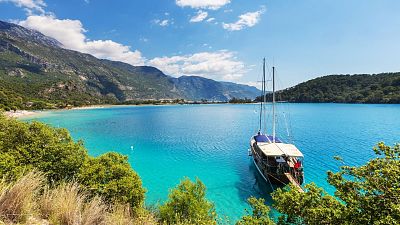 Now that the UK has scrapped its traffic light system, holiday-makers are booking trips to popular destinations previously off limits. Among the countries moved onto the Green list were Egypt, Sri Lanka, The Maldives and in Europe - Turkey.

While many Europeans see Turkey as the perfect ‘fly and flop’ beach holiday, it has much more to offer than just sun loungers.

It shares borders with Greece, Bulgaria, Georgia, Armenia, Azerbaijan, Iran, Iraq and Syria. Each country influences Turkey’s culture in its own way, so that each corner of the country feels completely different to the others.

Here’s everything you need to know for a last minute getaway.

If you’re travelling to Turkey from the EU or the US, you’ll need to show either proof of two COVID vaccinations, evidence of recent COVID recovery or a negative PCR test taken within the last 72 hours.

Turkey is one of the growing number of countries taking the ‘mix and match’ vaccine approach too. That means switching to different COVID-19 vaccines for second doses or booster shots. So it’s likely those with two different vaccines are still able to enter.

But the rules are slightly different for passengers arriving from the UK, Iran, Egypt and Singapore. Passengers from these countries must show a negative PCR test taken within 72 hours prior to arriving in Turkey, even if they are double vaccinated.

If you are travelling from one of those four countries and just transiting through Turkey, you don’t need to show a test result.

All arrivals into Turkey, except Turkish citizens or residence permit holders, must complete an online form within 72 hours of arrival.

Do you have to wear a mask in Turkey?

You must wear a face mask at all times whilst in airports, and for the duration of all flights, to and from Turkey.

The wearing of masks is also mandatory at all times outside the home throughout Turkey. This includes on the streets, in parks, gardens, picnic areas, markets, at the seaside and on public transportation.

Provinces in Turkey are split into four tiers in accordance with the COVID-19 risk: low, medium, high and very high. A map of Turkey illustrating these tiers is available from the Ministry of Health.

Are any areas of Turkey dangerous?

The UK’s FCDO (Foreign, Commonwealth and Development Office) advises against all travel to areas within 10 km of the border with Syria, except the city of Kilis.

This extends to all but essential travel to other areas of Sirnak, Kilis (including Kilis city), Hatay provinces, the provinces of Diyarbakir, Tunceli and Hakkari.

However the FCDO also notes that most trips to Turkey every year are trouble-free.

What is there to do in Turkey?

Turkey's capital is Ankara, but its largest city and financial centre is Istanbul. Either one makes for a great jumping off point, but Istanbul is easier to navigate as a tourist.

The Eastern Anatolia Region is the largest, consisting mainly of mountains and Turkey’s largest lake, Lake Van. The capital, Ankara, is located in the Central Anatolia Region and the tourist hub of Istanbul is in the Marmara.

Each area is famous for different things, but in general Istanbul is seen as the most popular destination. Bodrum works out as the best place to stay on a budget (with the best nightlife) and Cappadocia has some of the most beautiful and dramatic landscapes. The best beaches are Patara beach, the Bodrum peninsula and Kaputas beach.

Here are 5 great things to get up to on your stay:

Göreme National Park and the Rock Sites of Cappadocia are on the UNESCO World Heritage site list. The spectacular rocky landscape was entirely sculpted by erosion and provides evidence of Byzantine art in the post-Iconoclastic period. Human habitat remains dating back to the 4th century can be found here.

While you’re there, you can take a 1-hour hot air balloon flight and look out over the “fairy chimneys”, or hoodoos, mountain ridges and valleys. The best time to go is at sunrise, when the skies are a faded orange.

4. Take a trip to the blue lagoon of Ölüdeniz

Ölüdeniz is a lagoon and beach resort in the Fethiye district of the Muğla Province, This is on Turquoise Coast of southwestern Turkey.

There is a sandy bay to go and visit and the lagoon itself is a national nature reserve. The seawater of Ölüdeniz is famous for its shades of turquoise and aquamarine.

A great activity to do here is paragliding. It is regarded as one of the best places in the world to paraglide due to its unique panoramic views and stable weather conditions - 2000m in the air.

The best international airports to fly into for the Turquoise Coast are Fethiye and Antalya.

Nature and animals lovers will adore Dalyan turtle beach (also called Iztuzu Beach) It’s known all over Turkey for its natural splendour. There are over 100 varieties of bird species here as well as three varieties of turtle, including the endangered Loggerhead Caretta caretta.

You can take a boat trip from the town’s harbour to reach the beach and visit the main turtle conservation area. This is a great place to swim alongside turtles, visit nearby hot springs or take a mud bath.

The mud here is rich in minerals like magnesium and sulfur, both beneficial to the skin.

2. Head to the Blue Mosque in Istanbul

The famous Blue Mosque (or Sultan Ahmed Mosque) is an Ottoman-era masterpiece and functioning place of worship in Istanbul.

But why is it called the Blue Mosque? Because its interior is lined with over 20,000 İznik tiles, a ceramic that is turquoise in colour. The mosque's upper levels are also painted blue, with lots of natural light and more than 200 stained-glass windows.

The mosque is particularly architecturally unique due to its six minarets and five domes. Six minarets were unusual even for an imperial mosque built in the 1600s as they implied equality with the multi-minareted mosques of Mecca.

It’s popular with both tourists and worshippers, so you'll have to make sure you book your slot - but it’s worth it to experience the grandeur of this historic building.

1. Go for a walk in Derinkuyu’s underground city

The Derinkuyu underground city is an ancient, multi-level city in the Nevşehir province. It was built to shelter 20,000 people during the Arab–Byzantine wars (780–1180 AD), spanning eight floors and reaching depths of over 280 feet (85 metres).

The city continued to be used by Christians as protection from the Mongolian incursions of Timur in the 14th century and then when the region fell to the Ottomans, it was used as a refuge by the natives from the Turkish Muslim rulers.

You can take a guided walking tour and explore the excavated ruins, including the remains of stables, cellars, storage rooms, kitchens, wineries, and wells.

The experience is unforgettable and a very popular option for tourists, but be aware that the narrow tunnels and small chambers can make navigating Derinkuyu tricky for those who suffer from claustrophobia.

What’s the best time of year to visit Turkey?

April, May, September and October are lovely and warm, with temperatures of between 20°C and 30°C. These are typically the best times to visit Turkey's historic sites and the latter two months can offer European travellers some much needed winter sun.

The summer months of June through to September are very hot, with temperatures reaching 35°C on the south coast.

A guide to Jordan: What to see and do while you’re there