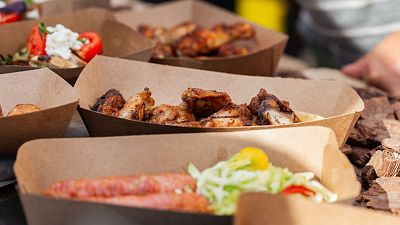 Feasts, fairs and festivals in Europe are often celebrations of a local culture that’s very unique to the region. A common theme across some of the longest-running and most bizarre festivals is food. From oranges to truffles and all kinds of fish and fowl, if you can eat it, you can certainly celebrate it.

Here, we’re tucking in to the delights of four of Europe’s most unusual cultural festivals.

1. The Battle of the Oranges, Ivrea, Italy

The carnival of Ivrea is not so much a celebration of the orange for its nutritious qualities, rather, it’s more a recognition of its usefulness as a handy and easily-available missile.

On this messy day, hundreds upon hundreds of kilos of oranges are hurled and squished as the participants indulge in a symbolic battle against starvation and tyranny. It all began in the 12th century when a villainous count oppressed the local population and allowed townsfolk a mere pot of beans twice a year to ward off hunger.

A popular revolt took place, in which beans were thrown on the ground to show contempt for this treatment. Later additions to the annual re-enactment included confetti, sugared almonds and flowers until the 19th century, when oranges, with their exotic French associations, began to be tossed by young women from their balconies to the suitors below.

Visitors to the February festival who would like to see the spectacle but don’t want to risk injury from a flying citrus fruit can hide behind safety nets covering the buildings or, if they venture out into the streets, wear a red hat to show that they are not part of the battle.

Find out more at turinitalyguide.com

Dedicated entirely to every imaginable aspect of the pig, La Pourcailhade takes place on the second Sunday of August in the Hautes-Pyrénées department in southwestern France.

This rowdy affair goes far beyond an excuse to cook and eat some delicious meat. Here, events include a Best Pig Outfit competition and the noisy ‘Cri de Cochon’, in which competitors vie to out-oink, squeal and snort each other to take the prize.

There’s also a piglet race, which is often bet on by many. Naturally, there are also the ‘who can eat the most’-style competitions for those with the appetite for them.

Fun and frivolous as the festival events are, they are deeply ingrained in the farming culture of the region, in which pig-rearing was central to its economic stability. Trie-sur-Baise was indeed once the site of France’s largest pig market.

Food is both a pleasure and a cornerstone of communities, this balance of joy and respect is very apparent in Finland.

Every October since 1743, fishermen in Helsinki have navigated their small boats to the wharf in the Market Square to sell their catch. This is the time of year that the Baltic herring gather in enormous schools, making for some good days work for the fishermen and providing a stable food source for the population.

The tradition has grown over the years from what was once just an annual fish market into a wider celebration of Finnish foods. Herring, whether it’s salted, marinated or soused, is always at the centre though. New ways of celebrating the plentiful fish have grown up alongside the fair. There’s a competition to find the best herring-based dish, a filleting contest and a harbour-wide race of traditional sailing ships.

Visitors can immerse themselves in seminars to learn more about the Baltic Sea. Or, you could attend fish-handling demonstrations and sample such delicacies as chocolate herring with potatoes, accompanied by traditional black archipelago bread.

See more about Helsinki at visitfinland.com.

The start of the white truffle season in Istria, long celebrated by residents, has developed over recent decades into a festival of times past.

Subotina Festival is held over a weekend in September in Buzet, the ‘town of truffles’. The focus of the first day is making an enormous omelette consisting of ten kilos of white truffles and over 2,000 eggs. This is accompanied by a plentiful flow of white malvazija and red teran grape wines.

On the second day of the festival, everyone in the town dresses in traditional costumes to recreate their own version of the olden days, with demonstrations of traditional crafts like carpentry, basket weaving and stonemasonry. The streets are filled with dancing to live accordion music, while non-dancing visitors can select from stalls offering up an array of truffle-based goodies.

Find out more at Istra.hr.

The eye-watering cost of this year’s British summer holidays