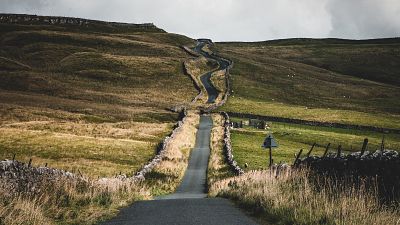 Straddling the Pennines, the Yorkshire Dales dominates the landscape of northern England with outstanding natural beauty. A place rich in history and lost in time, it’s my home.

I’m lucky to have been raised in between its breathtaking valleys: carved into the limestone by glaciers, segmented neatly by iconic dry stone walls. The national park has just been awarded best in Europe. Here’s why.

The town of Richmond sits on the edge of the Yorkshire Dales National Park. Referred to as the ‘gateway to the Dales’ by locals - it’s the last town before kilometres of rolling limestone valleys and farmland.

Richmond is centred around a castle constructed during the Norman conquest of England in 1071. It’s since burst the original castle walls to become a bustling market town. The name Richmond comes from its early conquerors, which translates to ‘strong hill’ in Norman French. Strategically perched on top of the valley, the town lives up to its legacy.

From above, the castle walk - a path that hugs the old castle walls - snakes around the hill. There’s a sheer drop below, where an invading army would’ve had to climb, bombarded by arrows shot from defending archers in the castle towers. At the bottom of the hill flows the River Swale, said to be England’s fastest river, carving a path through the valley.

In 2009, Richmond was the winner of the Academy of Urbanism's Great Town Award - it’s clear why. Richmond has an abundance of independent businesses dotted across its iconic market square which creates an intimate community spirit. Richmond is one of the many Yorkshire market towns in the area, packed with an abundance of medieval alleyways, Georgian buildings and historical relics to explore.

Travelling upstream and 18km away from Richmond is Reeth, a small village of 800 which hosted a leg of the Tour De France in 2014. Surrounded by limestone hills, the village feels like it’s been untouched for generations.

Reeth is a popular pit-stop on the Coast-to-Coast trial, a famous long-distance footpath that stretches across northern England. Taking in the scenery on the village green, a windswept hiker commented on their day’s trip around the valley.

“I first visited this part of the world 15 years ago. Ever since discovering Reeth it’s drawn me back in, year-on-year. This area is incredibly beautiful - you don’t get it anywhere else in the country, in my opinion,” she remarks.

Crossing over the valley into Wensleydale, we arrived at the quaint town of Hawes. The town is a 30 minute drive from the nearest town and a population of just under 900. Hawes is an isolated gem and famous for its Wensleydale cheese.

One resident of Hawes says, “It’s idyllic, I can’t see myself living anywhere else. However, what makes this place so special is its community spirit.” She continues, “Every year, we have visitors to our lovely village, I’m lucky to experience it every day. Even if the weather can be rough in winter.”

Leaving the Hawes and venturing up the valley, the landscape is barren and breathtaking. Above the treeline, single-track roads snake across the hills. As the clouds clear, the fields appear golden-green - divided only by rugged chunks of limestone jutting out of the earth.

Eventually, we reach an old farmhouse advertising fresh, homemade cakes. A farmer called Rodney greeted us at the door. He lives with his wife and son, a dry stone waller - a traditional English form of bricklaying. Originally given to Rodney by his grandfather, the farm has been part of his family for generations.

“My father lives on the farm just down the road,” Rodney tells me, noting the strong sense of community in the local area between farmers. “Before my granddad took on the farm, the property used to house workers from the nearby railway over 100 years ago.”

North Yorkshire has many pockets of rich heritage. From abandoned lead mines to extravagant country estates, each offers a glance into Yorkshire’s past.

Ribblehead Viaduct is no exception. Constructed in 1869, the structure symbolises the might of Britain’s industrial revolution. Up to 2,300 men, mostly living in shanty towns nearby, were involved in constructing the viaduct. Over 100 lost their lives in doing so.

Its symmetrical stone arches are visible from afar; straddling the Ribble Valley, edging above the mist. The railway, stretching from Settle to Carlisle, was the last mainline to be constructed in Britain primarily by manual labour. It’s hard to imagine the conditions these workers had to endure to place every stone by hand.

Alongside man-made landmarks, the Yorkshire Dales also bolsters impressive natural landmarks. Malham Cove is a large curved limestone cliff, a short walk north of the village Malham. The structure was formed by a waterfall carrying meltwater from glaciers at the end of the last Ice Age, more than 12,000 years ago. The 80-metre cliff is challenged by rock climbers who travel across the country to scale the greyscale rock face.

The top of the cliff, covered in rutted limestone pavement, is accessible by foot. The view looking south onto the rolling hills of low-land north Yorkshire is superb (and might feel familiar). The cove has been used as a filming location for blockbuster titles such as Harry Potter and The Deathly Hallows.

The Yorkshire Dales is often overlooked when compared with neighbouring national parks like the Lake District and Peak District. Awarded the best National Park in Europe, the area is finally getting the international recognition it deserves.

There’s so much more to be said about the beautiful part of the world. Whether you’re planning a day trip or a longer stay, make sure you put The Dales on your bucket list - it’s waiting to be explored.

Meet the Maramures carpenters of Romania and see their amazing craft