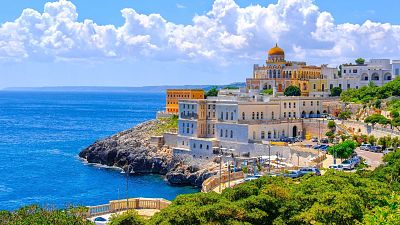 Europe is blessed with a huge array of national languages. English is the most widely spoken language, including non-native speakers. Russian takes the crown for the most native speakers.

Sometimes whole countries speak the same language. But more often than not, the words and phrases people use to communicate vary between regions. Indeed, it’s one of the delights of travelling. Meeting locals and learning the, often funny, colloquialisms unique to their area.

But what about areas where they don’t adopt the national language? There are villages and even hamlets across Europe where they have retained a local dialect. If you want a real taste of culture and history, head to one of these.

Livonian in the village of Mazirbe, Latvia

In Latvia, the dialect Liovonian belongs to the group of Finno-Ugric tongues. Its last fluent native speaker, Grizelda Kristiņa, died in 2013 at the age of 103. But about 250 people still speak the language.

There are 12 villages along Latvia's Baltic shores where Livonian is spoken. Among them is the village of Mazirbe, population 147, which is considered Latvia's Livonian cultural capital.

Bolze in the district of Basse-ville, Fribourg, Switzerland

Not completely French, not completely Swiss German, Bolze is a true mix that only citizens of Basse-ville (lower town) in Fribourg understand and speak. To master it, you need to be perfectly bilingual in both languages. Up for the challenge?

Part of the history of Fribourg, the Bolze is considered more than a language: it appeared during the Industrial Revolution and melds language, politics and culture, such as its famous carnival.

Sometimes known as Vilamovian, this West-Germanic language appeared in the 12th Century and was spoken in the city of Wilamowice until World War II.

Now, a young local activist, Tymoteusz Król, fights to retain the culture of Wymysiöeryś through amateur theatre and tourist projects.

Cornish in the village of Camborne, UK

Along with Welsh and Breton, Cornish is a direct descendant of the Common Brittonic language, which was spoken in Britain before English took over. Cornish is a revived language, having become extinct in 1777 after the death of Dolly Pentreath, the last native speaker of the Cornish language.

In 2011, about 500 people declared Cornish as their main language. A pre-school in Camborne teaches Cornish to its young students, but you can also hear it on BBC Radio Cornwall and read it in local newspapers.

Manx in the town of Douglas, the Isle of Man, UK

Spoken as the Isle of Man’s first language until 1974, when its last native speaker died, Manx has been the subject of language revival since 2015. Only 2 per cent of the population claims to have knowledge of Manx, which represents 1,800 speakers out of 88,000.

In 2006, the first full-length novel in Manx, ‘Dunveryssyn yn Tooder-Folley’ (The Vampire Murders) was published by Brian Stowell, a satirical story of scandal and dubious goings-on in the present day Isle of Man.

Griko in the region of Calabria, Italy

Two small Italiot Greek-speaking communities survive today in the region of Calabria and Salento (province of Lecce). Its own speakers call it 'greko' in the former, and 'griko' in the latter.

Today it is spoken by 20,000 predominantly elderly people. Although Griki are full-fledged Italian citizens, they are acutely aware of their Greek roots and they maintain multiple identities. They easily switch back and forth between Italian and the two local dialects, Romanzo, which is Italian based, and Griko. A key to their identity, and a factor that makes them unique, is their strong defense of Griko.

Have we missed out on any of your intriguing languages? Let us know in the comment section.