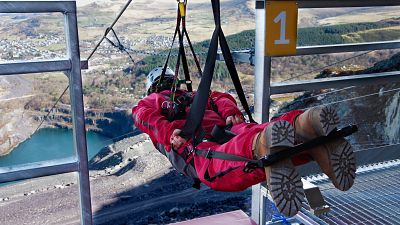 A region rich in natural minerals, the slate of northwest Wales first enjoyed coastal imports in the Middle Ages before the industrial revolution prompted a boom in global demand.

Communities were built on and flourished around the slate industry.

However, by the twentieth century mines and quarries had become unprofitable, forcing the majority to close while leaving the landscape irrevocably changed.

Fast-forward to the present day and unique new experiences are bringing much-needed employment to communities in and around the Eryri (Snowdonia) National Park.

Spearheading the revival is the Zip World brand, which maintains sites across Wales. At Zip World Slate Caverns, situated in the town of Blaenau Ffestiniog, its most unique offering is Bounce Below, a series of trampoline-style nets suspended within a dreamily illuminated underground chamber.

Above ground, take in the imposing spoil heaps (waste material removed during mining) which dwarf the town below - for every 10 tons of rock processed, only one would have been of usable quality. The Welsh slate industry reached peak production in 1898 when it employed 17,000 men producing 485,000 tons of slate; following the Great Fire of Hamburg, it was Welsh slate used in bringing the city to its former glory.

However, developments in manufacture saw slate fall out of fashion in favour of competitively priced tiles.

Included in the cost of Titan 2, Europe’s first 4-person zip line, is an in-depth tour of the historic Llechwedd Slate Quarry. As you look down on the site, town and national park beyond, take a moment to appreciate the isolation which inspired the London National Gallery to hide its priceless works from Hitler within these hillsides.

Once you’ve had your adrenaline fix, don’t forget to stop by the gift shop for some award-winning Dragon Cavern Cheddar, which matures 500ft below the ground giving it a special depth of flavour.

Go Below’s intense caving experience takes you through the deepest slate mine in the world - suitable only for those at peak physical fitness who possess the steeliest of nerves.

Meanwhile, Go Below’s intense caving experience takes you through the deepest slate mine in the world - known among quarrymen as The Slaughterhouse and suitable only for those at peak physical fitness who possess the steeliest of nerves.

At Zip World Penrhyn Quarry, Bethesda, prepare to be amazed by what was once the world’s largest slate quarry.

From 1900 a dispute between the quarrymen and owner Lord Penrhyn regarding wages and working conditions prompted a bitter three-year strike, and even today you’ll find some animosity between the families of those who stood by their values and those ‘bradwyr’ (traitors) who returned to work.

To get your blood pumping, hop onto the Quarry Karts, the UK’s only mountain kart experience, before moving onto Velocity 2, the fastest zip line in the world reaching speeds of up to and exceeding 100mph!

Zip over the bright blue lake from a height of 500m.

The quarry’s ‘galleries’, or levels, are still visible today, the result of blasting into the cliff face with dynamite in search of good slate. According to Des Morris, author of Snowdonia Slate, ‘The man who was most vulnerable would have been the one drilling shot holes ready for the explosive. He would only have a rope wrapped around his thigh a couple of times as his sole security’.

Fortunately your safety measures will be far more stringent as you zip over the bright blue lake from a height of 500m.

The latest addition to the region’s attractions is an underwater escape experience, situated in the picturesque (and flooded) Vivian Quarry Llanberis. Before you dive in, learn all about what life would have been like for quarrymen by paying a visit to the National Slate Museum and Dinorwic Quarry Hospital.

When you’re ready, Scuba Escape currently offers a choice of five full and three mini games. From here you’ll be locked inside the quarry itself: will you save the world from a nuke blast? Locals from the evil king of Eryri? Or yourself from the living dead?

The 18-20 metre deep pool is suitable for PADI divers, while non-PADI divers can participate with supervision if there are dive aspects they aren’t experienced in. Meanwhile, novices can opt for a bespoke package to learn followed by the scuba escape itself.

“We wanted to bring something new to UK diving in a time when international travel is limited. Quarries are great to dive in as there are times where conditions don't allow you to dive off the coast, so we wanted to make something fun for divers to practice and learn new skills,” co-owner Leanne Clowes explains.

The glory days of Welsh slate may be over but its legacy lives on in the surrounding communities, now benefiting from the re-purposing of these historic sites.

As we await the results of a bid to have this collection of quarries and mines named a UNESCO World Heritage Site, it’s hoped that the rest of the world might join us in celebrating the mines and the working class communities that worked them.