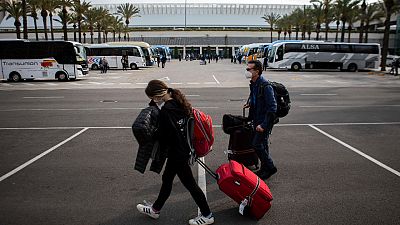 Tourists from around the world are now able to visit Spain - so long as they are vaccinated.

Starting on Monday, the country said that visitors from nations identified as both low and high-risk will be able to visit Spain as the country strives to reinstate its "world tourism leadership" after being hard-hit by the coronavirus pandemic.

Spain has already been reopening its borders in recent weeks, to travellers from most countries in the European Union and from a number of countries around the world.

Under the new rules, travellers coming from countries identified as "risk" zones will be able to enter Spain so long as they have a "certificate of vaccination" or "recovery" from coronavirus, as well as a negative COVID-19 test, with antigen tests now accepted alongside PCR tests.

Those coming from low-risk zones will not be required to provide proof of vaccination, recovery or a diagnostic test, the Spanish government said.

She also said that she believed Spain is "in a position to soon regain our world tourism leadership" amid "excellent vaccination data" that she said has helped "place us every day closer to the return to normality".

Those wishing to travel to Spain will have to fill out a health control form through the Spanish Travel Health (SpTH) platform first.

Meanwhile, those coming from countries identified as "risk" zones can expect a higher level of scrutiny at the border, with the country establishing two different control points at airports and ports for those coming from high and low-risk nations.

"Those who come from countries or areas not included in the list of risk countries will have access to a quick control with [a] QR code obtained through SpTH," the Spanish government says on its website.

"On the other hand, those who come from areas that are included in the list of countries at risk will have to undergo a random documentary control, which will take into account their place of origin and the level of incidence," the government says.

Only vaccines approved by the European Medicines Agency (EMA) or World Health Organisation (WHO) will be accepted, it states.

The controls at the Spanish border are mandatory not only for tourists arriving in Spain, but also for those planning to transit through the country.

Meanwhile, children under the age of six are "exempt from these procedures", the government states.

Spain underwent one of Europe's most strict lockdowns in spring of 2020, but reopened to visitors over the summer months that year.

In November, however, the country entered a state of emergency over rising coronavirus cases that lasted until 9 May of this year.