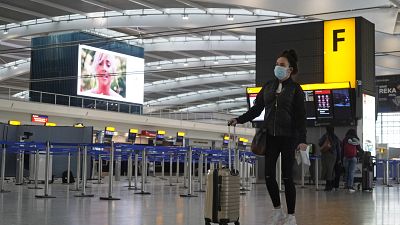 The United Kingdom risks "becoming increasingly isolated" if it keeps its doors closed to international travel despite the increasing number of vaccinations, a global tourism body has warned.

The World Travel and Tourism Council (WTTC), which represents the private sector, accuses the British government of an "overcautious approach" with its new "traffic light" system authorising travel to other countries, announced on May 17.

It says airlines radically increased their capacity, anticipating that travel would be opened up, only to find bookings lagged behind and cancellations followed as the UK largely kept restrictions in place.

The WTTC cites data showing that airlines ramped up the number of scheduled flights from the UK to Greece by 2000%, and to Spain by 435%, in the two weeks following the announcement.

Yet after mid-May bookings plunged and by the end of the month cancellations were outstripping bookings, the council says.

Its criticism of UK policy came ahead of Thursday's move by the British government to downgrade Portugal from its "green" to the "amber" list of destinations amid the pandemic. Effective from June 8, it means visitors to the UK from Portugal, including returning holidaymakers, will have to quarantine for 10 days upon arrival.

The decision will leave fewer than a dozen countries and territories on the green list -- and none from the European Union.

The WTTC calls for all fully vaccinated Britons to be able to travel freely to countries with similar or higher vaccination levels to the UK.

"WTTC is calling upon the government to allow all those who are fully vaccinated, or can show proof of a negative COVID-19 test, to travel freely," says Senior Vice President Virginia Messina.

The body warns that Britain is "losing its competitive edge" created by the early vaccination rollout as Europe opens up quicker of the UK.

On Wednesday another vaccination milestone was reached in the UK with the announcement that 75% of the adult population have received a first dose, and half of all adults are fully vaccinated.

Yet international travel for Britons remains largely impractical, despite the fact that countries such as Spain and Italy have opened their doors.

In contrast, also on Wednesday the European Commission said that seven EU countries have launched the bloc's COVID-19 "digital pass" system for travel across the region, ahead of a full release planned for July 1.

The plan is for a single system to facilitate safe travel by verifying the pass holder's coronavirus status – whether through vaccination, a recent negative test result, or proof of recovery from the virus.

"We are seeing many countries, particularly those in the EU, allowing travellers that have been vaccinated or can show a negative test result, which will provide a boost to their economies in such a pivotal time," the WTTC's Virginia Messina added.

Everything you need to know about the EU's COVID travel pass