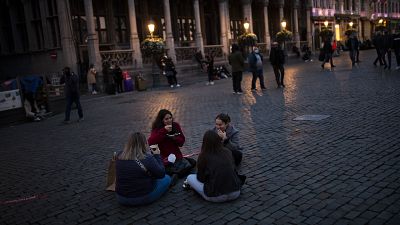 Locals in Brussels have been left bemused by rules that require them to respect a curfew on Friday evening... for just two hours!

They will have to be indoors by 10 pm, but, just 120 minutes later are free to go out again.

Belgium's nighttime curfew, which ran from midnight to 5 am, will be lifted at midnight on Friday/Saturday and be replaced by a ban on gatherings of more than three people from different households over the same five-hour period.

But in the capital Brussels, the curfew has been starting two hours earlier, at 10 pm. It will still be in place on Friday, meaning locals will have to endure two hours of it before the new restrictions regime kicks in.

"This is a Belgian joke and not even a good Belgian joke," Brussels MP Gilles Verstraeten told Flemish radio on Thursday morning.

"My tolerance limit for such absurdities has reached its lowest point by now," he is also quoted as saying by local media.

Restrictions imposed across Belgium in October to curb a resurgence of the pandemic started being lifted last month.

Schools and hairdressers, forced to close again in late March, were allowed to reopen on April 19 while the ban on non-essential travel outside the country's borders was lifted.

The next phase of the easing takes place on May 8 when cafés and restaurants will be allowed to open their terraces.

With more than 24,400 fatalities since the beginning of the pandemic, the country of 11.5 million has the 10th highest COVID-19 death rate relative to population in the world, according to Johns Hopkins University.

Its 14-day incidence rate currently stands at 392.2 cases per 100,000 population, placing it in the bottom half of EU/EEA countries, according to the European Centre for Disease Prevention and Control (ECDC).

But the number of new cases has been trending down over the last month with the 7-day average now under 3,000, compared to a peak of over 4,800 in late March.

This has eased some of the pressure on hospitals. There were fewer than 800 COVID-19 patients in ICU on Tuesday, a level last reached on April 1.