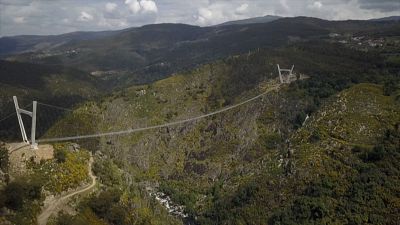 At more than half a kilometre across, the ‘516 Arouca’ in Portugal is the world’s longest pedestrian suspension bridge.

Although the construction of the bridge had been completed for some time, it was officially opened to the public on Thursday.

Named after its length - 516 metres - it hangs some 175 metres above the Paiva River in the north of the country.

While the height may be intimidating for some, local residents who were the first to walk it enjoyed their experience.

“I strongly advise you to come even if, like me, you are afraid of heights. I must admit that I did not suffer from it at all while crossing."

A fundamental attraction for the region

Another resident, Marcio Soares, said he was “proud to be here”, and called it "a unique experience".

Portugal has stolen the crown from Switzerland for the longest pedestrian bridge, with the 516 Arouca surpassing the Charles Kuonen footbridge in the Swiss Alps.

Connecting two granite escarpments located in the municipality of Arouca, the bridge is made up of 127 mesh trays with metal railings, connected by steel cables to the V-shaped pillars erected on either side.

"Even though the construction of the bridge has been finished for some time, this inauguration is important because it allows us to resume our tourist activity," the mayor of Arouca, Margarida Belem, said as she welcomed the opening of a "fundamental attraction" for the region.

This part of the banks of the Paiva River already had an 8-kilometre-long course of wooden footbridges that wind down to the valley floor.