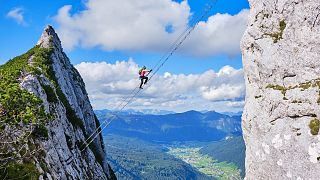 With blue skies seemingly in reaching distance above your head, the rough rock face at your cheek and the world mapped out hundreds of metres below your feet, via ferrata are not for the faint hearted.

For some, images of people clambering up ladders over deep ravines or steps embedded in the mountain side is enough to induce sweaty palms. For others, the rush of adrenaline starts flowing.

While the phenomenon of via ferrata - Italian for "iron path" - has now spread throughout the world, the snaking trails of metal steps, wooden gangways, cable bridges and ladders have their origins in the First World War.

The Alps were a major front in the conflict, and to allow Italian troops to move quickly and safely through the otherwise difficult terrain, a series of metal paths through the mountains were conceived.

Nowadays, via ferrata are the preserve of thrill-seekers with a head for heights. But don't worry, you're attached to a strong metal safety cable the whole time.

Varying in design, length and skill level, they do all have one thing in common - they all afford spectacular views.

If you can steel your nerve, here are the best places to try via ferrata for yourself.

The home of the original via ferrata, there are over 600 different "iron paths" in the Dolomites alone. Some routes entail as little attitude gain as 150 metres while others mean scaling 1,200 metres skyward or more. To get the full experience, trek to traditional ‘rifugios’, small mountain huts where you can eat, sleep or shower - or just sit and soak up the alpine views.

As with Italy, most of the best via ferrata in France are in the Alps. One to please novices and enthusiasts alike - and considered to be the most beautiful - is le Rocher du Saint Julien in the Drome region. At 1.6 km long and with a 288-metre vertical drop, it’s sure to get your chest pounding. Les Évettes takes the crown though with its sweeping panoramas of the Mont Blanc range.

Granted dangling 1,800 metres above the Lauterbrunnen valley floor is not everyone’s idea of fun, but the views from the steps and rope bridges of the Mürren via ferrata are unlikely to be matched. The 2.2 km route takes you on metal staples and ladders, tightropes, suspension bridges and a zipwire over a ravine. How is it different from most via ferrata? You are climbing down most of the way rather than up.

The spectacular mountain landscapes of Slovenia are one of Europe’s best-kept secrets. While most people flock to the Alps in France, Switzerland and Italy for hiking, skiing and climbing, the Julian Alps in Slovenia offer unspoilt beauty without the crowds. One of the most challenging – and popular - via ferratas is the climb to the summit of Mount Triglav, towering at 2864 m above sea level. The views from the top are well worth the challenge, though.

While the Dolomites claim the glory as the birthplace of via ferrata, Austria can perhaps claim the most with over 900 trails to suit novices and pros alike. And given the sheer abundance of mountainous areas in Austria, each one has its own unique traits. Take the Stuibenfall via ferrata, for instance, which takes you within touching distance of the thundering Stuibenfall waterfall.

Romania is a latecomer to the via ferrata craze but it has well and truly taken to the sport with zeal. There are many trails to choose from in the central European country, including Rasnoava Gorge (Cheile Rasnoavei) and Turda Gorge (Cheile Turzii). Or try Sugau Gorge (Cheile Sugaului) where the rock face is as tall as five 10-storey tower blocks standing end to end.

Spain has 50 via ferrata routes to try, mostly in the Pyrenees in Catalonia and the hills of Andalucia. The best part of trying via ferrata in Spain? Nearly all of the Spanish trails are on high ground within a short distance of major cities including Barcelona, Girona and Malaga. While they are generally associated with peaks, there is an amazing via ferrata to try in the Tajo gorge beneath the renowned hilltop town of Ronda and its famous bridge.

Where is this magical 'treehouse' and why is it so popular on Airbnb?

Miss flying? British Airways has you covered with its new meal kits