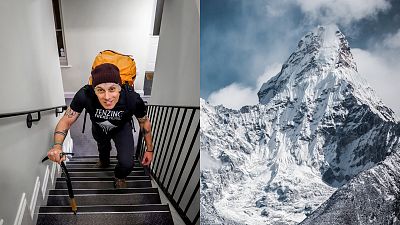 A British man has become the first person to climb the height of Mount Everest from home. Rob Ferguson climbed an extraordinary 6,506 flights of stairs in 24 hours, barefoot.

“I might have lapsed into insanity now and then,” Rob, 51, tells Euronews Living with a laugh. An intrepid adventurer and photographer, he is used to undergoing challenges of endurance, and this was no different. “Long distance climbing is always about pacing yourself, whether that’s up a mountain or at home,” he continues, “there are various emotional states you go through, but it’s all about one step at a time.”

As a fellow of the Royal Geographical Society and ambassador for outdoor brand Arcteryx in London, Rob has spent much of his life in extreme environments. He uses his photography and writing to bring back tales from around the world focusing on human stories and climate change. In 2018, he was invited to go to Nepal as part of the TENZING Everest Challenge, with the chance to visit sustainability projects while he was out there. The trip should have taken place in April 2020, but was cancelled amid the COVID-19 pandemic.

A self-proclaimed “stubborn” athlete, Rob doesn’t give up easily and instead decided to undertake the climb during self-isolation at home. Alongside fellow climbers Jenny Wordsworth and Lucy Aspden, who unfortunately had to stop half-way due to injuries, Rob was raising money for the Royal Medical Benevolent Fund (RMBF) which provides crucial help and support to doctors and their families.

How did he manage 6,506 flights of stairs and how long did it take?

Beginning at 7.15 am on Thursday 9th April and finishing his descent at 7.45 am on Friday 10th, Rob’s climb took just over 24 hours and he covered a total of 17,600 metres. Mount Everest is the Earth's highest mountain, its peak is 8,848 metres above sea level, so Rob managed to double that – climbing both up and down the equivalent of Everest.

According to Rob, the trick is only to stop for a maximum of ten minutes at a time and to space out these mini breaks every 50-100 flights of stairs. Over the course of the ascent, “you go through stages of feeling elated, quieter more introverted periods, and of course, dark stages where you just want to give up,” says Rob.

With three hours left and around 1,000 flights left to climb, he found himself entering the dark stage. At this point, Rob nearly gave up, saying it seemed like there was an “insurmountable amount” left to attempt. Slapping himself round the face, he jokes, he allowed himself a short sit-down and got back up to finish the climb, determined to finish and achieve his goal, which he did.

“What helps is support, sometimes when I’m on a climb, just receiving a text from someone who cares is what gets me through it – or even just knowing that there are people thinking of me.” For Rob, who also works part-time as a physiotherapist in the NHS, this feeling of support is what front-line workers need most at this this unsettling time. “I had the choice to stop,” he says, “but NHS workers don’t have that luxury, they know that the work has got be done,” a thought that motivated him throughout his ascent on Thursday.

Jamling Tenzing Torgay, son of Sherpa Tenzing who was the first to climb Everest in 1953, met Rob at the ‘top’ of his stairway mountain - via Zoom.

Climbing the highest mountain in the world is no easy feat. Historically, there have been over 4,000 successful climbers on Mount Everest, which straddles the border between Nepal and Tibet, in the Mahalangur Himal sub-range of the Himalayas. In 2018, the record for most in one year was broken, with 800 individuals attempting.

At Everest's highest point, you are breathing in a third of the amount of oxygen you would normally breathe due to the atmospheric pressure. Some will die on the ascent, with 265 having lost their lives on the climb between 1922 and 2014, according to the British Mountaineering Council (BMC). Fortunately, the fatality rate has been dropping in recent years.

One problem that the mountain faces is overtourism. “Everest is Over”, a now heralded article written in 2019 by The Atlantic, claimed that “crowds, trash, and selfies at its summit” had ruined the famous climbing destination. Due to climate change, the Himalayas “could lose more than a third of their glaciers by the end of the century,” the report states. Between the “garbage dump” many say it has become and the warming of the Himalayas, experts wonder whether it might be a good time to start preserving the mountain rather than visiting it.

This way, “mountain tourism workers could [] help maintain and improve paths and campsites, and most importantly, remove the huge amounts of rubbish produced by climbing expeditions,” reports Yana Wengel, an associate professor in tourism and geography at Hainan University, China, for The Independent.

You can follow Rob's stories on Instagram and online at www.robfergusonfrgs.com and still donate to his JustGiving page here.