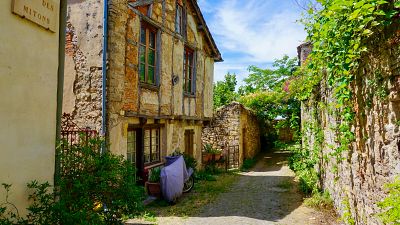 A region of southwestern France is paying for visitors to come and experience the area.

The department of Corrèze, located between the cities of Limoges and Toulouse, has organised a competition on Facebook. Winners will be able to experience a weekend of complete local immersion, with all expenses paid for. More than 1,500 people have entered the draw, with only 15 families selected as winners.

Next weekend, 19 - 21 February, the chosen participants will be able to visit Corrèze and take part in several activities which showcase the area’s outstanding natural beauty. Strolling through Brive-la-Gaillarde, visiting the Peatlands of Longeroux, and discovering the medieval city of Aubazines are all on the agenda for the lucky winners.

According to a survey by IFOP, 35% of French people are ready to leave their city lifestyle behind for a quieter alternative - prompted by a pandemic which has kept most people indoors this past year.

The region hopes the initiative will help new people to discover the opportunities on offer there.

Corrèze covers nearly 6,000 square kilometres, and with no major cities in the department, it’s known for its rolling countryside and green spaces.

Named after the River Corrèze which runs directly through the area, and providing a plethora of nature, its capital is Tulle but its most densely populated town is Brive-la-Gaillarde.

The department is an idyllic vision of France. Half-timbered houses and cottages characterise the surrounding towns and villages.

Fortresses and castles paint the historical canvas of Corrèze, which is rooted in the Age of Chivalry. This romantic past can be explored in the various local museums and art galleries.

In recent years, according to its census, Corrèze has only seen a 0.1 per cent population increase. The area is ready to welcome new people to its stunning surroundings - and hopefully boost the economy too following a long year of lockdowns.

For more information about Corrèze, **visit the tourism board’s Instagram. **