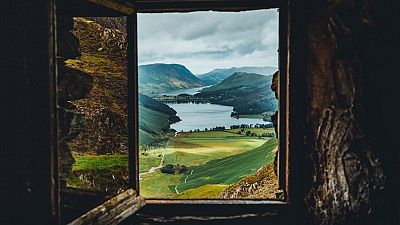 _Hailing from the seaside town of Eastbourne, East Sussex, Adam Firman _grew up surrounded by the rural beauty of England. Now he captures that very nature through his lens, travelling throughout the UK and some of the most remote parts of Europe.

This lifelong immersion may explain Adam’s distinct style of landscape photography. Capturing landscapes from a distinctive and unexpected angle, providing a refreshing take on unique and unforgettable sceneries.

Adam seeks out more distant and sensational locations, such as the Faroe Islands and the Highlands of Scotland, to create his photographs. He is equally inspired by frequent visits to locations closer to home such as the Lake District, Peak District and Wales.

Adam’s unique and unforgettable style of imagery can be attributed to his meticulous eye for detail, coupled with his embrace of light and shadow.

I would say a photo I took through a window in the Warnscale Bothy in The Lake District. For those unfamiliar with a bothy, it’s a stone house equipped with the basic essentials - like a fire and beds, and is there for anyone who gets stranded in the mountains after dark or in bad weather.

Myself and a friend, Simon, were hiking the night before and decided to take shelter here. The rain was coming down hard and we were drenched through. As I kicked open the door, I was greeted by a couple making use of the space themselves so I panicked, closed the door and stood back outside in the rain.

Simon asked what I was doing and after explaining the situation to him, I spoke through the door and explained they had five minutes before we would be coming in. We were faced with a rather awkward silence that we managed to neutralise with alcohol and Marks & Spencers' crudites.

The atmosphere started to lighten as we all exchanged ghost stories before falling asleep. When I woke the next morning, the storm had passed. I took a look out of the window and was greeted with a breathtaking view of Buttermere. I decided to spend some time trying to recreate this moment with a photo that would portray a scene of both the view out over the valley and the bothy window combined.

This has since become one of my most popular images, replicated many times & shared by a wide array of accounts over social media - the biggest of which being Unesco.

What are some of the biggest challenges you face when trying to get a shot?

It used to be the weather, but I’m not as phased by it anymore. When I first started taking photos I was obsessed with getting the first or last light of the day and avoiding harsh sunlight to get the right mood for images. But I’ve come to realise it’s better to adapt to your surroundings than to get hung up on the conditions you were hoping for. There’s always an opportunity for a good photo, you just have to look for it.

Aside from this it has been flying my drone in countries with unpredictable conditions - like Scotland and Norway, where the sun has turned to gale force winds and hail, forcing me to land the drone in uncharted areas (including the sea). Needless to say, panic and drone operations tend to go hand in hand.

Whose work has influenced you the most?

It was a group of very talented photographers called the "Peaks Collective" who first got me into photography. They were capturing amazing colours, moods and atmospheres in their pictures from around the Peak District, UK.

I was obsessed with their work, and so started to travel to different parts of the UK with my phone, taking lots of pictures of landscapes & editing them on my phone without really knowing what I was doing. This went on for about a year until I bought my first camera, a canon 500d, and switched to Lightroom which was about five years ago now.

I would say my main inspiration from the collective is Daniel Casson. A lovely guy and a true master of the game who has come to be a good friend.⁣

Do you have any tips or advice for other travel and landscape photographers?

I think if this year has taught me one thing, it’s that you don’t have to travel round the world to get good landscape photography.

Practise your craft close to home and try to represent your local area. Take photos that mean something to you, not other people. This is a pitfall a lot of social media landscape photographers fall into, and it can be detrimental to your creativity.

If you’re just starting out don’t feel that you need to buy a camera right away. Any camera phone is just as good a starting point these days. You can also get great editing apps for phones that are just as powerful as desktop software. Snapseed and VSCO to name just a couple.