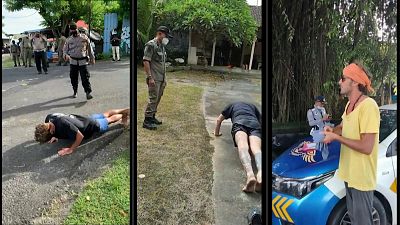 Police in Bali have found a unique way of dealing with people refusing to comply with COVID-19 regulations.

Anyone caught not wearing a mask in public, who cannot pay the fine, are being made to do 50 push-ups. For those found to be wearing a mask improperly, such as not covering the nose fully, the punishment is 15 push-ups.

In videos shared on social media this week, tourists can be seen doing push-ups in the street.

It has been mandatory to wear masks in public on the Indonesian island since the pandemic began, but police have found tourists are still not following the law.

Police officers watching over the offenders say they’re growing tired of the excuses given for not wearing a mask.

Since the start of the year, dozens of visitors to the island are reported to have been arrested for not wearing a face mask. “90 per cent of offenders are foreign tourists," says Suryanegara.

Despite the tourism sector struggling, authorities in Bali are considering deporting foreign visitors who don't wear masks or comply with the COVID-19 regulations.

"I try to follow health protocols. If I go to a store, of course I wear a mask," says Russian tourist, Margarita Chlapak, in the resort town of Canggu. Chlapak wasn’t wearing one out in the street at the time of being interviewed by AFP, and Balinese authorities are clamping down on it.

Tourists have been banned since April last year, except those who have residence in Bali or are visiting from other parts of Indonesia are allowed to enter.

The end is in sight though, after 1.2 million doses of the Sinovac vaccine arrived in Indonesia in early December. The government has made it free to all citizens.

Given the island’s reliance on foreign visitors, the vaccine will be vital in supporting Bali’s economy.

What is a vaccine passport and which countries are using them?