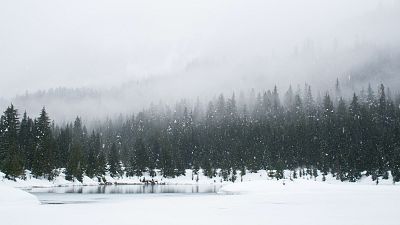 It’s the stuff of dreams: waking up on Christmas morning and gazing out the window to a blanket of snow. Despite the impact of climate change in recent years, many countries still enjoy a more traditional-looking white Christmas

We’ve compiled a list of the places most likely to get a dashing of snow on Christmas Day 2020 - plus a couple you might not expect.

Starting with one of the most famously snow-covered places in the world, Lapland is said to be the home to the real Father Christmas (or Santa Claus) and spends over 200 days of the year covered.

Its location - in close proximity to the North Pole - means it’s perfect for skiers, and star gazers who want to see the Northern Lights.

Lapland has become a popular winter holiday for families from around the world who bring excited children to visit Father Christmas with their wish lists.

Although there are COVID-19 restrictions in place for 2020, Finland has remained open for tourism with Santa still making an appearance - from behind a screen.

Lapland is a truly magical place at Christmas. Whether you fancy hiking through the snow-covered landscape, dog sledging or just enjoying the beautiful snowy scenery, Lapland has something for everyone.

Whilst the UK isn’t well-known for its white-capped mountains, it may surprise you to learn that Scotland gets around 15-20 days of snow on average each year- and that’s a mild year.

The west coast of Scotland fronts the North Sea, and typically sees more snowfall than the rest of the country due to its exposed coastlines inviting the weather to blow in.

The cities that see a generous dusting of the white stuff around Christmas include Glasgow, Aberdeen, and the village of Glencoe in the Scottish Highlands. Locals have adapted well to the chilly conditions - in fact, Scotland has capitalised on it’s guaranteed snowfall and opened it’s very own ski resort!

The Christmas markets in Hungary have become a staple in the traveller’s Christmas calendar, with tourists from around the world eager to visit for its frosty winters and festive celebrations.

Stroll around the lit-up streets in the snowy city of Budapest and enjoy a real European Christmas with street food and plenty of chimney cake!

Budapest offers travellers so much to do and see - especially at Christmas time. From festive lights to Christmas cruises, the city comes alive in the festive season. You don’t even have to be particularly festive to enjoy this Hungarian city in the snow, with the famous Szechenyi thermal spas or ruin bars offering more traditional Hungarian culture.

And if you’re not looking for a city break- don’t despair, there are plenty of other places in Hungary such as the ancient town of Debrecen that is definitely worth a visit for snow on Christmas Day.

New York City is one of the most drastic seasonal cities in the world enjoying hot, balmy summers and bitterly cold, snowy winters.

Sitting in the world’s largest natural harbour, many visitors forget that as an island New York City is positioned between the Hudson River and Atlantic Ocean, and subsequently gets a whole range of weather fronts.

The winter weather has actually become one of the contributing factors for tourists visiting the iconic city, as it’s been the setting for many classic Christmas films including Home Alone and Miracle on 34th Street.

Christmas starts early in New York City: If you visit from November onwards it’s impossible not to feel festive.

From seeing the iconic Christmas tree in Madison Square Gardens to horse and carriage rides and ice skating in Central Park, New York really has all the ingredients for a truly festive Christmas.

While there are ongoing health and safety regulations in place this year, it’s certainly one of the most magical places you could visit for a white Christmas.

Whether you’re looking for some great skiing spots in Whistler, whale-watching on Vancouver Island or strolling the streets of Quebec, you can guarantee it will be with a backdrop of snow in Canada.

As one of the most northern countries in the world, Canada has plenty of places that provide a prolonged snowy season due to large parts of the country being surrounded by the arctic ocean.

Many parts of Canada also remain snow-covered for around five months of the year from October through to March which makes it the perfect place to enjoy a white Christmas, too.

Most famous for being a hotspot for winter sports, The Dolomites sit just south of The Alps in Europe and have gained a reputation for serving some of the most unique mountain views, known locally as “enrosadira” which means “getting reddish” pink skies at sunrise and sunset.

Situated in the northern part of Italy, The Dolomites have, in recent years, struggled with the real white stuff lasting all ski season, causing the ski resorts to use fake snow when the weather warmed up.

If you’re looking for a quieter place to enjoy some proper Italian culture, beautiful views and good skiing, The Dolomites is the place to visit!

Probably not the first place you’d think of spending Christmas if you’re looking for a white one but Hawaii does have white-capped mountains from December through to February, attracting tourists from around the world looking to enjoy winter and water sports all in one holiday.

Offering a more laid-back approach to living in general, Hawaii appeals to a whole host of travellers looking for both sun and snow.

Why not say ‘aloha’ to Hawaii in the winter and enjoy a white Christmas in a more unexpected island setting.

And one of the most unlikely places you’ll see snow is in Lebanon, Middle East, where snowfall over the last few years has become a common sight.

Boasting one of the highest ski resorts in the world, you can truly enjoy a white Christmas in one of the warmest continents; the Middle East.

Whilst travel may still be restricted in 2020, there’s always time to plan your next trip for 2021, or even make next Christmas the biggest holiday yet!