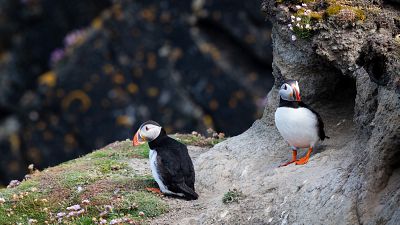 A distant view of Foula calls to mind a colossal iceberg, its swooping cliffs as smooth and blueish as wind-sculpted ice.

This is a rare view, however. More often than not, the island is shrouded behind a curtain of mist, its outline only coming into focus as one carefully threads through the treacherous Shaalds o’ Foula, a shallow protectorate reef.

Not only have the Shaalds kept the island from becoming a shipping hub, but they have allowed Foula to stay one step out of time with the rest of the world. The isolating reef explains Foula’s time-warping adherence to a centuries’ old calendar which means this island on the edge of the world celebrates Christmas 12 days late.

As though sending a message to the world about Foula’s enmity to change, The Shaalds have claimed their fair share of boats - most notably in 1914, when the passenger liner Oceanic ran aground.

In his book The Isle of Foula, island laird Ian Holbourn described Oceanic’s Captain Henry Smith declaring, with the confidence only possible in a beached sailor, that the ship would forever rest on the reef as a warning for other passing vessels.

The locals knew better, and gave the wreck two weeks. After a fortnight, the ship was gone, dashed apart by slapping, tempestuous seas.

Because of its location between the moody North Sea and the equally bitter Atlantic, Foula remains difficult to reach. Some 200 kilometers clear of the northern coast of Scotland, it is Britain’s most remote inhabited island.

Foula is connected to its nearest neighbour, the Shetland archipelago, by a twice-weekly ferry. A small boat, The New Advance, departs from Shetland’s western shore (weather permitting). A small and well-worn airstrip, also with connections solely to Shetland, provides the islanders their only other connection to the outside world.

As recently as the late 19th Century, the island was home to as many as 250 inhabitants. The extremis of that distant life was not for everyone. The pull of modernisation and urbanisation throughout the 20th Century left its mark and, for decades now, Foula’s population has remained steady, hovering around 30 people.

Self-sufficiency remains key; there is no pub or café, and apart from a post office, there are no commercial premises. For centuries, birds and their eggs formed the local diet. Now, a large herd of sheep and steamy greenhouses help diversify the local fare.

The Romans, despite history stating they made it at least as far north as the Orkney Islands, were aware of Foula, but unable to reach it. To them, it was the unapproachable Ultima Thule, the place “beyond the borders of the known world.”

This sense of distance, which has become as much cultural as geographical, has allowed today’s population to nurture a close connection to its Norse heritage. Like the rest of Shetland, there is evidence of settlement in Foula dating back to the Iron and Bronze Ages.

Far removed from Gaeldom and the Scottish clan system, this plug of land is believed to have existed for many years as a self-governing independent entity in its own right. Around 800 AD, roving Norsemen conquered Foula and settled the village of Hametoon. Today, local names such as Norderhus, Krugali, and Guttren dot the island.

Foula remained under Norse law until the late 16th century and was, until the 19th century, the last holdout of the ancient Norse language of Norn.

The world’s last-known speaker of Norn, Jeannie Ratter, died in 1926. Her daughter, interviewed in the 1950s, recalled the Norn lullaby her mother sang—which, with all its Viking tenderness, roughly translates as: “Sleep, my child. If you don’t, I’ll strike your head against the wall.” The remnants of the language can still be heard in the lilting, shushing tones of the Foulan accent, which is far removed from any rolling Scottish brogue.

The sea cliffs on the west of the island, including the 370-metre Kame, are some of the sheerest in Britain. In earlier times, toddlers were taken to cliff edges to quell their fear of heights. Watching the sea smashing against the rocks hundreds of meters below was meant to harden their nerves, making them bold climbers and fearless egg collectors.

Foula islanders are proud of their island’s heritage, even if contentment with their apartness means living slightly akilter. Despite not reaching the island, the Romans did manage to leave a lasting impact on their Ultima Thule.

For reasons still unknown, when Great Britain swapped the Julian calendar for the modern Gregorian in 1752, the country’s most remote areas—including Foula—decided against the change, sticking instead to the old Roman calendar.

When, in 1900, a leap year went unrecognized on the island, the dates slipped again. Local time on Foula places it one day ahead of the Julian calendar, and twelve days behind the Gregorian, a unique time-lag. Thus, Foula islanders celebrate Christmas, or Yule, on January 6th. New Year’s Day, or Newerday, falls on January 13th.

On Christmas Day, after exchanging gifts at home, islanders typically gather together to play music and dance. Songs such as “The Shaalds of Foula” and “The Fields of Foula,” fill the air, while boots clop to The Foula Reel, an ancient Scandinavian dance.

As the remnants of tenacious Norsemen, patience on Foula is not to be underestimated. The island had neither electricity nor running water until 1982.

Nonetheless, on the ancient Romans’ forbidding edge of the world, in the company of brutal weather and woolly lambs, and there is a feeling of being in sync with history.

As one islander commented: “It is everybody else who changed—not us.”

A look back at COVID-19's impact on European film festivals