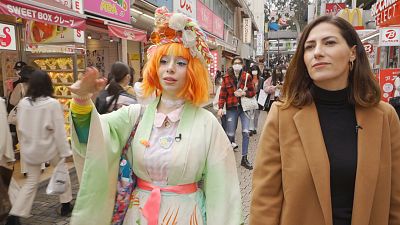 Harajuku, a district of Tokyo, is famous all over the world for its teenage street fashion. But there is also plenty of culture and history to explore.

Mathilde Baker is a French fashion designer who works in the area. "Harajuku is a lifestyle that I have adopted over 10 years ago now."

“There is a community around this fashion movement, and we meet each other, we exchange, we also create friendships."

"Harajuku it’s the Lolita style, which has been around for a while now. There is also the decora style which is very colourful with a lot of accessories."

“There are also mixes with traditional Japanese styles with kimonos like me today. It can also be darker styles, more gothic styles.”

Many designers display their wild creations in Takeshita Street

“My father started this shop from 1980,” explains Rimma Doi, CEO of ACDC Rag. “So many young people came here and made so many cultures.”

“Now we have Kawaii culture -- the background is we mixed many cultures from other countries. If you feel cute or pretty than that’s Kawaii. Japanese people like rules but on the other side, we have punk spirit too!”

And it all started at Kiddiland toy store. This toy store on Omotesando was one of the first to sell novelty goods to the American families stationed nearby in Yoyogi Park straight after the war, growing the area’s reputation as a trendsetting neighbourhood.

Local historian, Tsuyoshi Yamada, explains that Yoyogi, one of Tokyo’s most popular parks, has served many purposes since the 1940s.

“The US army wanted to make Yoyogi Park a place where officers could live with their families and turned it into a family complex called 'Washington Heights'."

"The Olympic Games were held in 1964, and at that time the Olympic Village welcomed many athletes. Yoyogi Park then opened to the public in 1967.”

A stone’s throw away is Meiji Jingu. Every year, more than ten million people pass through Torii gates.

Completed in 1920, this Shinto shrine is dedicated to the souls of Emperor Meiji and Empress Shoken. It was destroyed during the air raids of World War II but rebuilt in the 1950s.

“This well is 400 years old. Legend has it that it was dug by a feudal warlord. And apparently, it can bring you luck,” says Tsuyoshi Yamada.

Like the rest of Tokyo, the old cohabits with the new. Designed by star architect Kengo Kuma, this museum opened in 2019 to celebrate the 100th anniversary of the shrine.

Away from the hustle and bustle of Harajuku’s shopping streets, Meiji Jingu is a haven of peace, a place where visitors can get lost in 70 hectares of sacred forest, right in the heart of Tokyo.

Postponed Tokyo Olympics could be 'scrapped' if 2021 date doesn't work