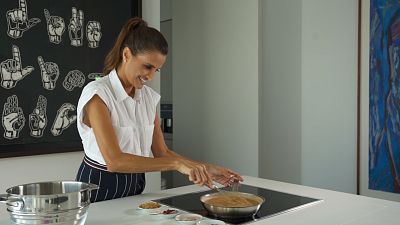 In a part of the world where a fast food diet is the norm, Dubai-based chef Rita Kahawaty is joining a growing movement to bring healthy, home-cooked meals to people's homes.

After surviving cancer 5 years ago, the Lebanese chef became dedicated to not only eating better, but also feeding better.

Kahawaty says, besides surviving cancer, her upbringing in the hills of Lebanon has had a major impact on her philosophy of food. Her first culinary lessons came from her mother’s side of the family, and her love of fresh ingredients from the herbs and vegetables that her father would grow.

Recipes are traditionally shared amongst relatives in Kahawaty's family. This recipe for peanut butter chicken is one she received from an aunt. Kahawaty says she loves the simplicity of the dish, which is why the recipe has remained untouched since she first received it.

Nutritious and underrated: top Dubai chef on why beetroot is best