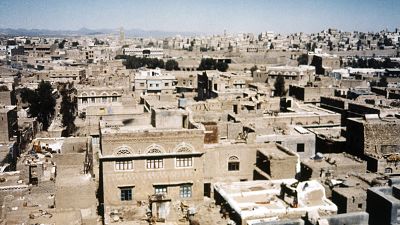 A sixteenth-century clay city in Yemen, which has survived wars, is now at risk of collapse due to torrential rainfall.

Coined the “Manhattan of the desert” for its clay skyscrapers, the historic city of Shibam - thought to be home to the oldest skyscraper in the world - is situated in one of the poorest regions of the Arabian peninsula.

Shibam, like two other historic Yemeni towns, stands as living witnesses to the clay architecture of the Hadramout, which was the foundation of many ancient civilisations.

The rains hit the country between April and September this year, resulting in devastating floods. Now, money is needed to help protect this UNESCO world heritage site from complete ruin.

Sana'a resident: 'our home will collapse on us' if heavy rains return

Ali Mahjaf, a baker from Sana'a, has lived in the old town with his family for over fifteen years. He's witnessed the tourist hub close off to the world when the civil war hit, and the recent storms mean he is at risk of losing his home:

"If the rains are like this again next year, our home will collapse on us if we don't fix it now. We pray to God that rains will not happen like this year again."

Mahjaf hopes that he will still have a home to fix by the time the civil war ends. He said: "Fixing it requires some money - about $300 - which we could not spend these days, the economy and circumstances are not good. Once the war ends, we will try to fix it."

In order to avoid any further damage to Shibam, the protective coating on the buildings must be re-done, but Euronews understands that the ongoing civil war and lack of funds are making this difficult for people like Ali Mahjaf in Sana'a.

A restoration operation of 40 residences is currently underway in Shibam with the assistance of UNESCO for an amount equivalent to approximately 166,000 euros.

How are e-tailers in the Middle East using human stories to drive sales?