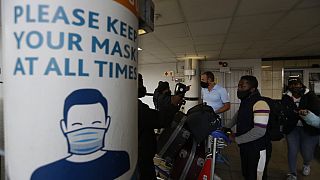 Passengers queue at the O.R. Tambo Airport in Johannesburg on October 1. after the airport reopened some international flights, ending a six-month ban on international travel.   -  Copyright  Themba Hadebe/Copyright 2020 The Associated Press. All rights reserved.
By Katy Dartford  •  Updated: 28/10/2020

International tourism dropped by 70 percent for the first eight months of 2020 according to the World Tourism Organisation (UNWTO), with its impact being felt across all regions around the world.

The latest data from the UNWTO World Tourism Barometer has shown that restrictions on travel introduced in response to the COVID-19 pandemic continue to hit global tourism.

International arrivals plummeted 81 percent in July and 79 percent in August, traditionally the two busiest months of the year and the peak of the Northern Hemisphere summer season.

The UNWTO says the leading into August represents 700 million fewer arrivals compared to the same period in 2019.

This translates into a loss of €617 billion in export revenues from international tourism and is more than eight times the loss experienced after the 2009 global economic and financial crisis.

“This unprecedented decline is having dramatic social and economic consequences and puts millions of jobs and businesses at risk,” warned UNWTO Secretary-General Zurab Pololikashvili.

“This underlines the urgent need to safely restart tourism, in a timely and coordinated manner.”

Asia and the Pacific, the first region to suffer from the impact of COVID-19, saw a 79 percent decrease in arrivals, followed by Africa and the Middle East (both -69 percent), Europe (-68 percent), and the Americas (-65 percent).

The recovery was short-lived, however, as travel restrictions and advisories were reintroduced amid an increase in contagions.

There was some light at the end of the tunnel, as Lynsey Devon, CEO and owner of UK based travel PR company Heaven Publicity explains. "Our clients were hit by the international arrivals plunging and instead had to look to a market closer to home, the local markets.

"Traditionally the two busiest months of the year a lot of the clients, in the end, reported an amazing upsurge in locals and visitors from within 100 miles although they lost out on the extra spend international clients bring with them."

On the other side of the spectrum, Asia and the Pacific recorded the largest declines with -96 percent in both months, reflecting the closure of borders in China and other major destinations in the region.

Demand for travel remains largely subdued due to the ongoing uncertainty about the pandemic and low confidence.

Based on the latest trends, UNWTO expects an overall drop close to 70% for the whole of 2020.

"It’s that unknown that is one of the hardest things to contend with,' says Devon. "All destinations have suffered, from ski resorts to summer retreats."

"With the temperature dropping and snow starting to fall across the Alps, many people are beginning to think about a winter sports holiday. Although companies are still receiving calls from customers wanting to visit the mountains, fewer people are keen to book a holiday when no one knows what’s going to happen next."

When are we likely to see a recovery in international tourism?

The UNWTO estimated that there will be a rebound in international tourism demand by the third quarter of 2021.

However, around 20% of UNWTO’s Panel of Experts suggest the rebound may only occur in 2022.

Travel restrictions in response to the COVID-19 pandemic are seen as the main barrier standing in the way of the recovery of international tourism, along with slow virus containment and low consumer confidence.

The lack of coordinated response among countries to ensure harmonised protocols and coordinated restrictions, as well as the deteriorating economic environment, were also identified by experts as important obstacles for recovery.

"The relatively new tier system in the UK can change suddenly, countries disappear and then reappear on the travel corridor list, and should you wear a face screen or a face mask? Or both?" says Devon.

"Each country, from Australia to Austria has put multiple systems, and laws, in place to protect its people. But we have to remember that we’re dealing with an illness that no one fully understands; it’s inevitable the rules are constantly chopping and changing."

Could the 'CommonPass' app help save the travel industry?