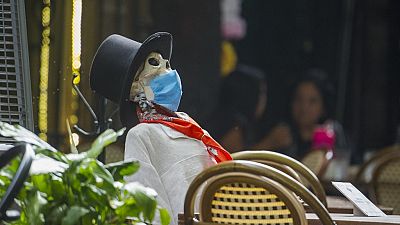 A Calaca is used to keep social distancing measures in Mexico City during Day of the Dead celebrations   -   Copyright  CLAUDIO CRUZ/AFP or licensors
By Katy Dartford  with AFP AP  •  Updated: 22/10/2020

Fifty brightly coloured skulls line Reforma Avenue in the Mexican capital to celebrate the Day of the Dead.

The ancient tradition blends Catholic rituals with the pre-Hispanic belief that the dead return once a year from the underworld. It is celebrated throughout Mexico as a way of welcoming those who are no longer with us.

The exhibit was set up by urban art project, Mexicraneos whose creations are aimed at enhancing and celebrating Mexican culture.

Mexicraneos hope the exhibit will become part of traditional festivities that are slowly being transformed into a public holiday, instead of the private offerings made at home to honour the dead on November 2nd.

Elsewhere across the city so-called Calaca -- the figure of a skull or skeleton used for decoration during the Mexican Day of the Dead -- are used to keep social distancing measures.

Cemeteries, public gardens, and houses are decorated with bright orange marigolds, but this year the celebrations have been scaled back to curb the spread of the coronavirus pandemic.

Day of the Dead plays, such as "La Llorona" or "The Weeping Woman" have also been altered to pay tribute to virus victims.

"La Llorona" traditionally tells the tale of the ghost of a woman who roams waterfront areas mourning her drowned children, is a legend that dates back to Aztec mythology.

"Other countries see us as people who mock Death, but that is not true." says theatre-goer Yahir Sanchez.

" We are quite close to each other and we remember our dead in this way -- visiting the tombs. Many others stay at home because they have the ashes on an altar and that is an option that can also work now."

Mexico's 'City of the Gods' reopens after five-month lockdown