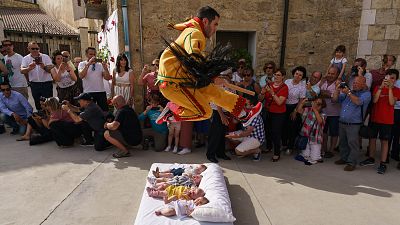 Forget Oktoberfest, Glastonbury, and Venice Carnival. Our roundup of unusual European festivals will have you rolling after cheese wheels in England, walking with donkeys in Portugal, and playing air guitar in Finland.

Every August, the Unesco world heritage site of Gisby – the largest town in Sweden’s island of Gotland – returns to its Medieval roots. To the backdrop of 13th century stone watchtowers and Gotland’s rolling green hills, festivalgoers participate in the world’s largest Medieval re-enactment with a week of jousting tournaments, street theatre, fire shows, and medieval-style markets. Once you’ve haggled for your leather goods at the marketplace or cheered on your favourite knight at the Battle of Wisby, be sure to sample the wild boar burger or roasted lamb cooked over an open flame.

In a small town in the north of Spain, Corpus Christi celebrations include jumping over newborn babies. The week-long festivities, which dates back to the early 17th century, begins with masked devils shouting and striking onlookers with horsehair whips. When drums sound and the atabaleros (the religious men who ward away evil) appear, the evil spirits hurl themselves over groups of babies laid out neatly on mattresses in the street, the act supposedly ridding the infants of sin and granting them a healthy and happy life. While the origins of the festival are disputed, some historians believe that the ritual began as a way to celebrate fertility and later developed into the representation of good versus evil.

The Donkey and the Bagpiper Festival, Portugal

In days past, Portugal’s mountainous municipality of Miranda do Douro was so remote that players of the local gaita-de-fole, or bagpipes, had to travel from village to village on the longhaired Miranda donkey to perform. Today, access between communities is far easier, but locals still celebrate the tradition by parading 20 of the region’s special donkeys through two chosen villages each year in July. The ceremonious parade is accompanied by four days of music, dance, and art workshops and performances, as well as copious amounts of Duro red wine, cheese, and smoked cured meats.

Cooper’s Hill Cheese-Rolling – named after a hill outside of Gloucester, England where the event takes place – is a race so dangerous that councils have made numerous attempts to ban it. Every year, however, dozens of men and women continue to throw themselves down a steep cliff behind a wheel of Double Gloucester cheese, a tradition with pagan roots that dates back to the early 19th century. Rolling at speeds of up to 70km per hour, whoever catches the cheese or gets to the finish line first is crowned the winner. The prize? A four kilogram Double Gloucester cheese wrapped in a red and blue ribbon.

At Finland’s Air Guitar World Championship, it doesn’t matter if you can’t play a single chord – it’s how you play it that matters. Since 1996, professional air guitarists from around the world have battled it out every August in Oulu, northern Finland, to be crowned Air Guitar Champions. Judges score participants based on their choice of music, energy, personality, and overall ability to get the crowd rocking. It’s worth attending just for the outfits and killer facial expressions.

Festival of the Kukeri, Bulgaria

Every winter, men and women across Bulgaria dress up as Kukeri dancers, mythical monsters so terrifying that they’ll scare off even the most persistent of evil spirits. The costumes, consisting of animal skins and furs, hand-painted masks, and large brass or copper bells worn around the waist, are meticulously hand-sewn or handed down from generation to generation, a tradition that spans back several millennia and, since 2015, earned UNESCO protection. Although the festival continues to be celebrated throughout Bulgaria, the largest and most colourful takes place in the town of Pernik, 50 km from Sofia.

The return of traditional camel racing to Egypt's Sinai desert