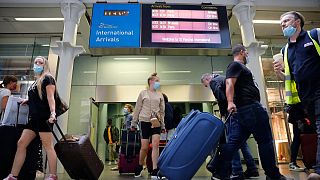 Britain imposed its own 14-day self-isolation rule for travellers returning from France on August 15, causing a flurry of passengers to rush back to the UK .   -   Copyright  TOLGA AKMEN / AFP
By Pascale Davies  •  Updated: 25/09/2020

Since British authorities imposed a 14-day quarantine rule on travellers arriving from countries such as France, Spain and Belgium, confusion has mounted for those looking to take a short trip to the UK and what it means for family or friends you may stay with.

Euronews clarifies what you can and can't do if you arrive from a country that isn't on the UK safe travel corridor list.

What are the travel rules to UK?

Under British government requirements set on August 15, travellers from France and some other countries to UK must quarantine for 14 days.

The rule also applies if a travel stop was made in those countries 14 days before arrival in England.

Passengers who travel to England, by train, ferry, coach, air or any other route are affected.

If you want to travel to the UK and stay for less than the 14-day quarantine period you are allowed to do so.

Before arriving at the UK border you are required to fill out a 'passenger locator form', which can be completed 48 hours before entering Britain.

On the form, you will state the day of arrival and the day you plan to leave.

But you will have to self-isolate for the period you stay in the UK.

If I stay less than 14 days can I still fly and take public transport back?

As long as the precautions are taken such as wearing a mask, you can take public transport to the airport, ferry or Eurostar.

Do family and friends I stay with have to quarantine?

If you stay with relatives, friends or other UK residents they do not have to quarantine, so long as they do not present COVID-19 symptoms.

What happens if I don't self-isolate in the UK?

The UK also has the right to refuse entry into the country to non-citizens if they refuse to comply with the quarantine rules. People who do not comply with rules such as filling in the passenger locator form can be fined £100 (111 euros).

Who is exempt from the rules?

Travellers from within the Common Travel Area (Ireland, Isle of Man and Channel Islands).

Representatives of a foreign country or territory and representatives of the British overseas territories, along with their families or dependents travelling to the UK to undertake official business with the UK.

A full list of those exempt from the rules can be found here.

What if I travel to the UK for work?

People who live in the UK but work in another country and travel between the UK and country of work at least once a week will have to fill out the passenger locator form and provide evidence of their work situation.

Why did the UK impose the quarantine measure?

Britain imposed the self-isolation requirement for travellers returning from France on August 15, causing a flurry of passengers to rush back to the UK and many cancelled holidays.

France was not the only country to be taken off the list.

The rules also apply to British holiday hot-spot Spain, as well as Malta, Belgium and The Netherlands, among other countries.

The UK defended the quarantine travel rule due to an increase in new coronavirus cases since lockdown measures were eased some two months ago.

France has seen a spike in new COVID-19 cases over the last few weeks.

The daily tally has reached a new post-lockdown record for several days in a row. Almost 5,000 cases were reported in 24 hours on Sunday.

On Monday, Germany also issued a travel warning for Paris and the southern region of Provence-Alpes-Cote-d'Azur, which includes the cities Marseille and Nice, due to the rising number of infections in the areas.

It now means travellers arriving in Germany from those areas must take a COVID-19 test and quarantine if the results are positive.

What about UK residents taking a trip to France?

France could be about to impose a tit-for-tat quarantine rule for travellers arriving from the UK in the coming days, according to comments by a French minister.

“We will have a measure called reciprocity so that our British friends do not close the border in one single way,” French Junior European Affairs Minister Clement Beaune told French television channel France 2 on Monday.

“For travellers returning from the United Kingdom, there will probably be restrictive measures decided in the next few days by the prime minister and by the defence council.”

French and British authorities have yet to officially confirm if the quarantine measure will be imposed.

Meanwhile, Britain said on Friday travellers from the UK to France are required to self-certify that they are not suffering coronavirus symptoms.

They also have to declare if they have been in contact with a confirmed case within 14 days preceding travel.