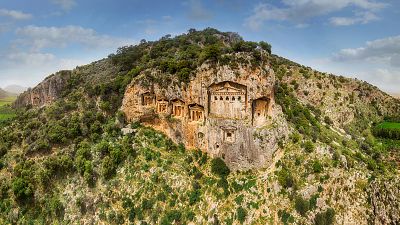 Carved into the cliffs of Southwest Turkey are hundreds of rock-cut tombs that resemble majestic Grecian temples.

Dating back to the 4th century, the Lycian King Tombs of Kaunos feature striking Greek-style pillars and intricate hand-carved reliefs depicting gods, angels and spirits. Inside, ancient monoliths and limestone-lined chambers mark the final resting place of the Lycian elite.

Believing that winged spirits would carry the souls of their dead to the afterlife, the Lycians – an ancient people who inhabited the bays between Turkey’s Antalya and Fethiye – buried their most respected members of society high up on the cliffs overlooking the emerald-green Dalyan River.

The Lycian King Tombs can be visited by private rowboat from the riverside town of Dalyan. Once you reach the small settlement of Çandır, you can explore the necropolis and the Ancient City of Kaunos by foot. A return row boat journey costs 15 Turkish lira (€1.71).