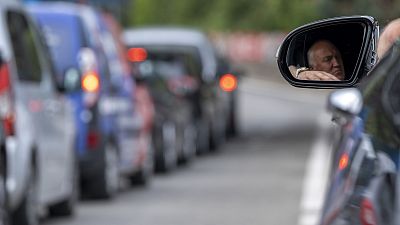 Despite the COVID-19 pandemic nearly halting the travel industry, Croatia is seeing long queues of traffic building up along its border.

In Istria, on the country's border with Slovenia, drivers were made to wait up to three hours to be allowed into the country on Saturday.

On the same day, Croatia reported its highest ever number of new infections in a 24 hour period - 140 more people caught the virus. Authorities now require face masks to be worn on public transport and in shops, bars and restaurants.

According to eVisitor system data, there are half a million holiday-goers in Croatia right now, mostly coming from Germany and Central Europe.

However, many predictions say there will only be about 40 per cent of tourists visiting the country this year compared to 2019, while souvenir shops and restaurants remain mostly empty.

In France, bumper-to-bumper traffic held up travellers looking to travel over the holiday weekend. Bison Fute, the French traffic advisory service reported a peak of 955km-worth of traffic jams at one point on Saturday.

What are air bridges? And can they save your summer holiday?

Ukraine war: The top developments you need to know for Tuesday