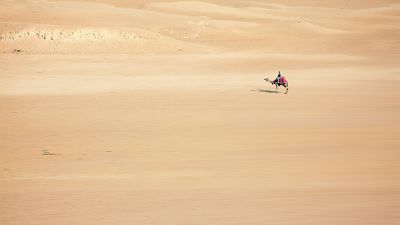 Alice Morrison is seasoned adventurer. In March 2019, she became the first woman to walk the 1500km length of the Draa River in Morocco. She has cycled across Africa from Cairo to Cape Town and run the toughest footrace on earth, the Marathon des Sables.

Her next undertaking is no less ambitious. From 26 November, she and a team are setting out on a three-month, 2000km long expedition across the Sahara Desert in an effort to record the impact of the Earth heating up.

The group will follow The Sahrawis people, who have seen large swathes of land they formerly used for arable farming eaten up by the desert.

“Desertification is one of the greatest environmental challenges of our time and climate change is making it worse,” says Alice.

The team is set to face a host of hardships on their trek, from extreme temperatures averaging 47C during daytime – and the sand underfoot reaching temperatures of 80C – to nights below freezing. Meanwhile, lethal vipers and scorpions are common in the region the team are set to traverse.

“There is a serious risk of running out of water as there is no up-to-date information on where viable wells currently are,” explains expedition organiser, Jean-Pierre. “Food fort he camels is also a concern. We will be following the nomads’ grazing routes but if climate change has dried out the camels’ diet of small shrubs and acacia trees, we will have to find and buy fodder.”

Morrison is set to trek from the northernmost of point of Morocco, where it meets the Atlantic Ocean, to the southern tip,

Scottish-born Alice is set to push herself to the extreme on her latest adventure.

“I know this is going to be tough, but I know I have a great team around me. The Draa Expedition taught me a lot and I feel ready to take on this, my biggest challenge yet.”