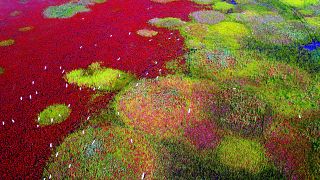 From German waterways to the ruins of Babylon, there was stiff competition to secure a place on 2019's updated list of cultural heritage sites.

Here, we count down seven of the most visually stunning in pictures.

This volcanic region covers nearly 14% of Iceland's territory - some 1,400,000 hectares. It contains ten central volcanoes, eight of which are subglacial. Two of these are among the most active in Iceland.

The interaction between volcanoes and the rifts that underlie the Vatnajökull ice cap takes many forms, the most spectacular of which is the jökulhlaup – a sudden flood caused by the breach of the margin of a glacier during an eruption. Volcanic areas are home to endemic groundwater fauna that has survived the Ice Age.

Along the Yellow Sea and into the Bohai Gulf of China, these bird sanctuaries lie along an intertidal mudflat system considered to be the largest in the world. These mudflats, as well as marshes and shoals, are exceptionally productive and serve as growth areas for many species of fish and crustaceans.

The intertidal areas of the Yellow Sea and Gulf of Bohai are of global importance for the gathering of many migratory bird species that use the East Asian-Australasian flyway. Large gatherings of birds, including some of the world's most endangered species, depend on the coastline as a stopover to moult, rest, winter or nest.

Located in a vast mountainous area in the centre of Gran Canaria, Risco Caído comprises cliffs, ravines and volcanic formations in a landscape of rich biodiversity.

The landscape includes a large number of troglodyte settlements — habitats, granaries and cisterns — whose age is proof of the presence of a pre-Hispanic culture on the island, which has evolved in isolation, from the arrival of North African Berbers, around the beginning of our era, until the first Spanish settlers in the 15th century.

The Hyrcanian forests form a unique forested range of mountains that stretch 850 km along the southern coast of the Caspian Sea. The history of these broad-leaved forests dates back 25 to 50 million years, when they covered most of this Northern Temperate region.

These ancient forest areas retreated during the Quaternary glaciations and then expanded again as the climate became milder. The vast diversity of floa remarkable: 44% of the vascular plants known in Iran are found in the Hyrcanian region, which only covers 7% of the country. To date, 180 species of birds typical of broad-leaved temperate forests and 58 mammal species have been recorded, including the Persian Leopard.

The French Austral Lands and Seas comprise the largest of the rare emerged landmasses in the southern Indian Ocean: the Crozet Archipelago, the Kerguelen Islands, Saint-Paul and Amsterdam Islands as well as 60 small sub-Antarctic islands.

An oasis in the middle of the Southern Ocean, the UNESCO-certified area covers more than 67 million hectares and supports one of the highest concentrations of birds and marine mammals in the world, according to UNESCO. In particular, it has the largest population of King Penguins and Yellow-nosed albatrosses in the world.

Located between the Serra da Bocaina mountain range and the Atlantic Ocean, this cultural landscape includes the historic centre of Paraty, one of Brazil's best-preserved coastal towns, as well as four protected natural areas of the Brazilian Atlantic Forest, one of the world’s five key biodiversity hotspots.

Paraty is home to an impressive diversity of species, some of which are threatened, such as the jaguar, the white-lipped peccary and several primate species, including the woolly spider monkey a, which are emblematic of the site. In the late 17th century, Paraty was the end-point of the Caminho do Ouro (Gold Route), along which gold was shipped to Europe. Its port also served as an entry point for tools and African slaves, sent to work in the mines.

The Dilmun Burial Mounds were built between 2050 and 1750 BCE. The area added to UNESCO's list spans 21 archaeological sites in the western part of the island. Six of these sites are burial mound fields consisting of a few dozen to several thousand graves.

In all there are almost 12,000 burial mounds, originally in the form of cylindrical low towers. The other 15 sites include 17 royal mounds, constructed as two-storey sepulchral towers. The burial mounds are evidence of the Early Dilmun civilization, around the 2nd millennium BCE, during which Bahrain became a trade hub whose prosperity enabled the inhabitants to develop an elaborate burial tradition applicable to the entire population.