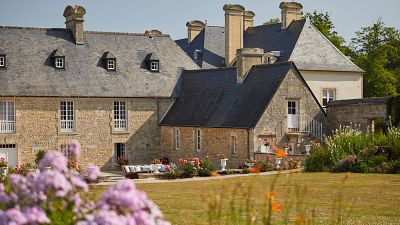 With windows spanning the length of the courtyard, Percy is the perfect vantage point to see but not be seen. Unless you throw the windows wide and stand in his juliette balcony. Percy is the name of Room 18 at Château d’Audrieu, in case you’re wondering.

Less of a room and more a palatial suite, Percy is named for the Percy family, which owned the château when it was extended to its current size in the early 18th century. Each of the 25 rooms have their own names, indicative of the individual identities they’ve been imbued with.

Some 24 of those rooms sit in the wings of the château. The 25th is a new addition in the form of a treehouse, granting the occupants complete solitude, high above the countryside. It offers views into the treeline, and a modern escape from the history of its setting.

Entirely clad in wood, which still smell of fresh pine two years after it first opened, the discreet hideaway also has a terrace on which to enjoy drinks, canapés and uninterrupted views of the surrounding countryside. From the comfort of simply chic furniture on a pared-back viewing platform, the intricate detailing on the architecture of Audrieu seems almost otherworldly, yet the two sit in harmony.

A juxtaposition between late renaissance stylings and modern luxuries is a recurring theme at Château d’Audrieu.

To approach, you may well be in 18th century France. The château was then seat of a barony, descendants of William the Conqueror’s cook, so say the locals. On arrival, there is not a car in sight and the only sounds are those of the village’s church bells and your own crunch on the gravelled driveway.

It transpires cars are not entirely banished from the Château d’Audrieu, simply nestled away where there is even a charger for the Teslas that have made the journey through winding country roads to get here.

Read more | How do you make a luxury tourism destination zero carbon?

You won’t catch a 52” screen above the fireplace. In fact, there is no TV in the suite’s living area. The décor is simpler, smarter and more sophisticated than that. Should you wish to catch up on essential viewing, you’ll be doing so from the comfort of a bed easily large enough to seat a class of pre-schoolers. Or sleep a pair of restless honeymooners, depending on your persuasion.

Instead, modern touches come in the USB ports embedded into mains power sockets. And in a bathroom, which in itself is bigger than many city apartments. All concessions to traditional French design are forgotten when one pads into the bathroom.

A warm, wooden floor leads to a centrepiece minimalist bath while a white mosaic wall, flecked with gold, hides a walk-in shower complete with Nespresso-style pods filled with essential oils. The scents percolate through the shower with scents to transport you across the globe.

Somehow, despite the comfort and elegance of the château and its grounds, they are not the main attraction. For a highlight of any visit to Audrieu must be to dine in the hotel restaurant, Le Seran.

Headed up by chef Olivier Barbarin, Le Seran is in hot pursuit of a Michelin star. Indeed, the restaurant was starred prior to the extensive renovation works of two years ago. Starting from scratch upon reopening, Barbarin’s seasonal menu always features produce cultivated in the hotel’s kitchen garden.

From courgette to berries, fennel to lavender, pears to onions, Barbarin is passionate about growing as many of his own ingredients as possible. In collaboration with Audrieu’s gardener, Alain – who has been with the hotel for more than 30 years – the two have attempted to bring flavours more often associated with the Mediterranean style of southern France to the Norman coast.

An advocate of exceptionally light, fresh cooking, Barbarin displays mastery pairing seafood with herby, floral flavours. The beauty of it all is that he has complete control of the process, from sourcing ingredients – 95% of which come from within 60km of the château, allowing for regular testing and tasting – to experimentation with new and delicious canapés. Personally, I’m still dreaming about his truffle toast and spring onion.

If breakfast, lunch and dinner in Barbarin’s capable hands still doesn’t seem enough, the hotel also offers an afternoon tea. What can often be a robotic process of seating, eating and retreating is littered with personal touches. Leaving the formality of the restaurant, afternoon tea is served in an upstairs drawing room, furnished with classic armchairs and sofas and scattered with statement pieces which serve as conversation-starters.

The food comes courtesy of Barbarin again. Featuring an array of pastries and bakery treats, it is quite the mix of high tea and homely comfort. I later found out the chef had spent time perfecting the recipes at home with his children, resulting in one of our cakes – a chocolately, fudgey creation – sharing a name with his daughter.

Everything about the hotel is geared towards luxury. From the frankly enormous suites, endless cuisine temptations and vast grounds, where you’ll find a donkey paddock if you explore hard enough.

Read more | Recovering from chronic stress in the mountains of India

The château could not be a more beautiful base from which to explore Normandy, which in itself is an unforgettable experience. The hotel team are more than happy to point you in the direction of the best sights and sounds, recommending private tours to steer clear of the crowd where possible.

Situated within 20 minutes of the historic coastline, the site of the D-Day landings, and relics of Nazi occupation, a visit is effortlessly as educational as it is indulgent. A journey through history starts with the Bayeux Tapestry, commissioned in the 11th century, and spans 900 years to well-kept cemeteries that became the final resting place of thousands soldiers who fell during the Second World War. Interspersed are quaint villages, restaurants and farmland that make the region famous.

Long days of exploring the monuments will take a physical and emotional toll, making the enviable ministrations of the onsite spa all the more necessary. Even at full capacity, walking through the château is so quiet, it could be your own home. But this is a venue that doesn’t take any chances when it comes to relaxation, so its Sothy’s spa is tucked away in the grounds, far from any chance of being disturbed.

A range of expertly administered massages and wellness treatments, a dip in its heated outdoor pool, and a game of pétanque are final nods to Château d’Audrieu’s commitment to complete care of its guests. Despite spending just two days in this provincial paradise, the flurry of activity when stepping off the train in Paris en route back to London seemed completely alien. Even for a dedicated city-dweller.