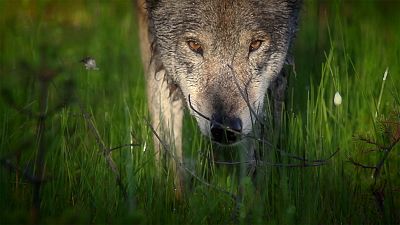 In the west of Belarus on the border with Poland lies the Belovezhskaya Pushcha National Park - or Białowieża Forest- a unique ecosystem with over 900 plants and 250 animals and birds, including several rare species.

But most famously, it's home to a large population of European bison, the continent's heaviest land animals, and the only place they can be found in the wild.

Belovezhskaya Pushcha National Park is the last fragment of a primeval forest which used to stretch from the Baltic Sea to the Buh River and from Odder to the Dnieper River.

It's the oldest nature reserve in Europe and a  UNESCO World Heritage site.

The first written references to Belovezhskaya Pushcha date back to the 10th century, with the first recorded piece of legislation on the protection of the forest dating back to the 16th century.

In the early 20th century, because of hunting, European bison were on the verge of extinction, but Belovezhskaya Pushcha is now home to more than 1200 wild bison.

"The European bison, now a symbol of Belovezhskaya Pushcha, is an animal that today can only be found in the wild in this area."

The Belovezhskaya Pushcha Biosphere Reserve occupies the area of 12,162 km2, with the national park occupying 1,500.69 km2.

Throughout the ages, various wars have all taken their toll on the forest. Most of the Białowieża Forest was declared a national park on August 11th, 1932 during the Second Polish Republic and in 1944 part of the reserve was given to neighbouring Poland.

The border between the two countries runs through the forest with the Białowieża National Park on the Polish side of the border. Since May 2015 there has been a visa-free regime within the forest for hikers and cyclists.

In 1992 it was made a UNESCO World Heritage Site and in 1993 it was granted UNESCO Biosphere Reserve status.

In 2009 the Belovezhskaya Pushcha National Park celebrated the 600th anniversary of its reserve status.

Minsk gears up for European Games