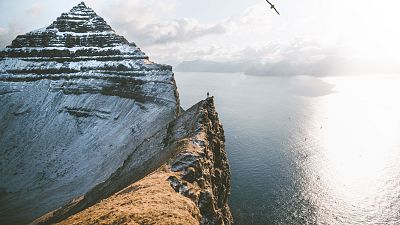 Right at the heart of the Austrian Alps, you'll find Roman Königshofer (@rawmeyn), an Austrian explorer-turned-photographer whose photographs suggest that paradise can be found here, on our back doorstep — or at least, on his.

Roman first became fascinated by the snowboarding universe, which led to him to mastering the sport. Meticulous by nature, it was at this point he turned his attention to photography.

Today his love of adventure has merged with a love of people. “Travelling is extremely eye-opening,” he said. His work certainly shows a clear interest in exploring foreign cultures and traditions.

When asked to describe his style he said: “It should feel real.”

His images have taken the internet by storm, featuring breathtaking landscapes and remote locations, always following the same principle: “Less is more.”

We asked the Austrian, self-taught photographer to tell us more about his craft.

How did your photography journey start?

Everything started when I was skateboarding and snowboarding at the age of 15. I wanted to capture the tricks my crew and I did, and I became really interested in cameras. I started with an analogue SLR.

What are your travel essentials and what camera do you use?

To sleep anywhere, my essentials are an eye mask and earplugs. Currently, I use an Olympus OM-D E-M1 II and a Sony A7rII.

What is the one thing you wish you knew when you started taking photos?

How would you describe your style of photography?

That is always the hardest question. 'Authentic, outdoor, adventure, landscape images?' Maybe... It should feel real. I also try to make my images as simple as possible. Less is more, that always wins.

What is your favourite place or thing to photograph? Why?

That's an easy one. Every mountain landscape I haven't been to yet. Because I simply love being out there doing my thing. Sometimes that means a lot of suffering and sometimes it comes easy. However, getting a unique photograph of a place I haven't seen before is extremely satisfying.

What is your favourite European location and why?

Probably northern Norway. Because there are the mountains but also the ocean and the waves.

That is a photo of the Geislerspitzen in the Dolomites in Italy. I haven's seen many shots of these mountains at that time. Now they are all over the internet but I rarely see a version that comes close to the photo I took. Looks like I got pretty lucky with the conditions there…

Whose work has influenced you most?

There isn't one guy. I grew up with a ton of snowboarding magazines and I guess this is what shaped my eye a lot. Snowboarding photographers often are really good artists and shoot images of the highest quality out there. I learned everything about composition just by looking at a ton of shots in magazines...