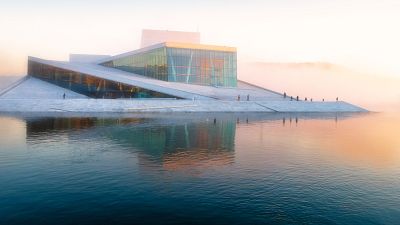 When you finally gaze upon Munch's masterwork at The National Gallery of Norway, all doubt and all cynicism fall away. You can feel Munch's pain in the painting. But that's only half the story because the other neatly arranged paintings here by Munch and by Christian and Oda Krohg from the same fin de siècle period depicted in Watkins' film show Oslo as a place of both awakening and anxiety.

That is still true today: Oslo-dwellers might be wealthier and endure less trauma now, yet they are still buttoned up against emotion and the cold. Yet, they are also highly creative souls who relish culture on the long, lonely winter nights.

Take ByLarm. This annual shindig showcases the best in Norwegian music and has provided a spring board for acts like Ida Maria and Casiokids to gain fame beyond their home shores, though these days it also puts on international bands like Makeness – the Scottish project that sounds like Caribou and which wowed a small audience in the hallowed surrounds of St Edmund's Kirke.

Stavanger's Sløtface draw a huge crowd to the cavernous hall at DOGA, the Norwegian Design and Architecture Centre, with their catchy yet cerebral brand of feminist indie pop. And another Norwegian band, Maraton, deploy the kind of sludge rock that gets heads bobbing in unison at the new Vulkan Arena venue.

Much of the festival is centred around the Vulkan area, a former industrial zone of Oslo which has now been gentrified with hotels, apartments, a noted gourmet food hall, bars, and the National Centre for Dance. The club Bla was here before everyone else and is celebrating its 20th anniversary. Next to Bla is Ingensteds - a former textile factory with a neatly redesigned interior hosting yet more ByLarm shows and a pleasant riverside terrace.

ByLarm also does quirky: the international press pack was invited to assemble at Salt where beers and dried blood sausage are laid on at this bar-cum-sauna. We strip down to bathers and enter the searing heat of one of Scandinavia's largest saunas, which has picture windows looking out on to the frozen Oslo Fjord, before entering the unbearably hot mini sauna jammed into a barrel that used to be used to make Akvavit. Outside Salt, two huge wooden V frames that are used to dry fish in Norway's North are appropriated to display a revolving selection of public art.

The walk from Salt back towards Oslo's centre gives you the chance to admire Snøhetta's Norwegian National Opera and Ballet, famous for the fact that you can clamber up on to its roof. Oslo packs a lot of architecture into a small city.

Its functionalist City Hall by Arnstein Arneberg and Magnus Poulsson took 20 years to build and looks magnificent. And just beyond Marc Quinn's sculpture of a contorted Kate Moss you can find The Y Blokka by Erling Viksjø from 1969. It's a government building that was damaged in the 2011 Oslo bombing. Despite it having the most amazing mural by Picasso and Carl Nesjar literally stenciled into the concrete side of the building, the Norwegian government have slated it for demolition, blaming the bomb damage.

More bombs are on the agenda at the Nobel Peace Centre. Alfred Nobel invented dynamite – and then created the famous Peace Prize to try and balance things out. In the centre there's a chilling exhibit about atomic weapons as well as an intriguing touring show – Lauren Greenfield's Generation Wealth. In one of the world's most expensive cities, it's piquant indeed to stare at Greenfield's fascinating photos examining conspicuous consumption, money, luxury, oligarchs and new elites, beauty contests and blinging houses.

Money and sex are (for some) life's great motivators. If you got caught trying to get your grubby mits on the former you could have ended up on Tjuvholmen (Thief's Island). Now the island is where well-heeled couples escape for alone time at The Thief.

This art-filled boutique hotel has a spa – perfect for winter warm ups; and in its restaurant a comforting menu with a brunch of baked brisket and cheesy fries, and for dinner monkfish with nduja, fennel, and black olives. Its bar is a hot ticket at weekends and from visiting guest mixologist Luca Carradini (an alumnus of Duck & Waffle and Mahiki) I learn how to make an extravagant Nordic martini infused with jet black charcoal syrup. Like Oslo it is small, extravagant, dark, cold yet ultimately warming, and packs a punch.

Chris stayed at The Thief