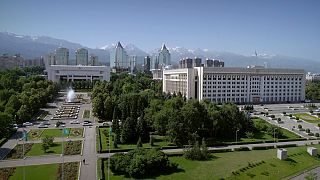 The city of a thousand colours – this is Almaty, the cultural capital and largest metropolitan area in Kazakhstan. The history of this megalopolis dates all the way back to the Silk Road. Vibrant, green and also the financial heart of the country, Almaty is a real source of inspiration – and not just for the locals.

Nestled cosily between mountains, the so-called “city of gardens” attracts plenty of travellers from all over the world.

Denis Keen literally knows every corner of the city: the American fell in love with Almaty when he came here as an exchange student. So he left California, moved here and created the original “Walking Almaty” tours.

Walking around one of the city’s splendid architectural highlights, Dennis’s enthusiasm is obvious. “This is really the jewel in the crown of Almaty, it is called ‘Voznesensky Sobor’ or Ascension Cathedral. The building is made out of these Tian Shan spruces, these local logs, and it was designed so well that now after 111 years after it was built those logs are still in great condition. I know the architect who actually was working on the reconstruction of this building and when they scraped off the upper layers they saw underneath like it was brand new.”

The cathedral is the world’s second tallest wooden building. Dennis is also inspired by the Abay State Opera and Ballet Theatre Building. Constructed in the early 1940s it was the first building to incorporate national Kazakh heritage traditions in its architecture.

“In the middle we have the guy playing dombra, the national instrument, and next to him we have realist figures here picking apples, because Almaty is the ‘Apple city.’ This is where all apples in the world can trace their roots, to the wild apple trees that grow in the hills outside the city”.

The interior of the theatre also tells the story of an ancient warrior whose grave was discovered in the Almaty region. The warrior was buried in an elaborate golden costume. This earned him the title of ‘‘the golden man’‘ and he’s since become one of the country’s symbols.

Askar Buribayev is the director of the Abay State Opera and Ballet Theatre and yielded further insight into the building’s interior design features. “This hall is decorated with the elements of the golden warrior’s costume. You can also see here the golden snow leopard, which is a symbol of Almaty, because this animal lives in our Trans-Ili Alatau mountains”.

A little way from the city lies the Schimbulak ski-resort in the Medeu valley, which turns into a huge outdoor natural gym when it gets hot. The highlight is the “Medeo”, an ice-rink located 1,691 metres above sea level. The mountains are so close to the city that some come to practice after work.

Kanat Khazhidinov is an Almaty resident who takes advantage of the proximity of the mountains. “You won’t believe it but it takes just twenty minutes to get here from work. I leave my office at 6 pm and by 6:20 pm I’m already here”.

Having mountains just 15 kilometres away from a modern high-tech city is the kind of location setup any filmmaker dreams about. Film director Kanagat Mustafin certainly thinks so. He just wrapped up some scenes from his latest film “The most beautiful”, all filmed close to Almaty.

“I was born and raised in Almaty and of course it is my beloved city, which I will never change for any other city in the world. That’s why all the events in my movies take place in Almaty, and why my heroes are moving to this city”.

Just like our hero, Dennis, who not only moved to the city but has helped to create the fabric of it’s story.

When he first arrived, he started by learning the hardest street names to pronounce. And he discovered that many of them are named after famous Kazakh musicians. That gave him the idea of creating a virtual “musical street map” of Almaty.

“The way it works is you go on Google maps, and as you walk you can click on the street you are on, so now we are on Kulash Baiseiytova street, she was one of the most famous Kazakh opera singers of all time. You can read a little biography that I wrote about her, they called her ‘the Kazakh nightingale’ and she was famous for her voice.”

Playing an old melody by the singer, Dennis also seems to approve. “There, she sounds like a nightingale,” he says.

Later, Dennis takes an American-German couple round an organised tour, including to the city’s famous Green Market. Among the visitors were also two young architects, David Kaminski and his colleague, who came here in search of inspiration. As this building was constructed in the 1970’s, it holds up as a perfect example of Soviet constructivism.

Kaminski is impressed with the styling and architectural features. “Those nine domes; they were created in the form of pyramids and first of all bring natural light into this place, it is extremely light here. And another thing – the windows, they can turn in a very special way in order to expel hot air from the market outside”.

The same evening at sunset, Dennis showed us some history: in one of the yurts of the “Nomad” restaurant we tasted beshbarmak – the most popular dish in Kazakhstan. It’s a mixture of horse meat, special pasta and onion sauce and was traditionally the food of the nomads.

Ever the willing and helpful tourist guide, Dennis was happy to give some pointers.“It is called ‘beshbarmak’ because it means ‘five fingers’, because you are supposed to eat it with your hands”.

But the real surprise came at the end of our walking tour of Almaty; a dobra concert played by none other than Dennis – himself probably one of the biggest surprises of this wonderful city.